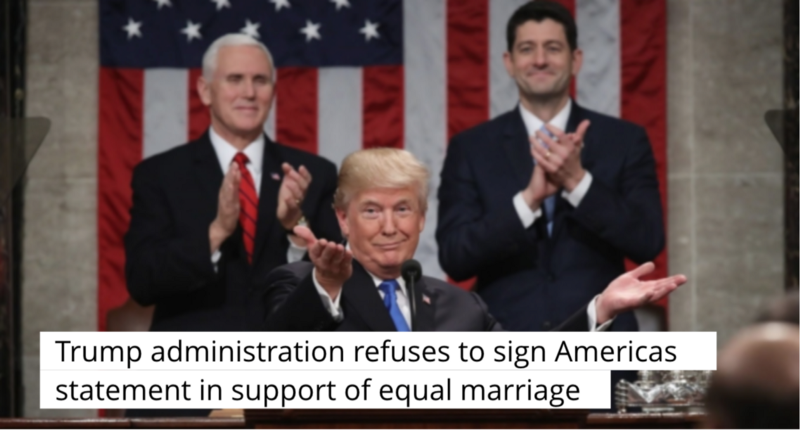 Since the ruling, seven of the eight countries in the Organization of American States (OAS) LGBTI Core Group signed on to a statement supporting the court’s opinion — but the United States declined to do so.The seven nations that signed the statement are Argentina, Brazil, Canada, Chile, Colombia, Mexico and Uruguay. The United States was the only member of the OAS LGBTI Core Group not to sign the statement welcoming the news.

The US Supreme Court has refused to hear a case regarding aMississippi law that allows people to deny services to LGBTQ people based on “sincerely held” religious beliefs. The Mississippi state law went into effect on 10 October 2016 — just a year after the highest court in the country ruled on the legality of gay marriage — after several state court battles by community advocacy lawyers.

Essentially, the law allows state employees to deny LGBTQ couples marriage licenses and offers legal protection for private businesses that choose not to serve LGBTQ customers based on the business owners’ religious beliefs.The law goes beyond marriage rights and private services — like the bakery in Colorado that refused to make a gay couple a wedding cake.

It includes access to necessary medical services since doctors and pharmacists with “sincerely held” religious beliefs are protected. Also, access is limited or cut off to any other rights afforded to legally married individuals in other states: health insurance, estate planning, tax benefits, custody of children, and adoption to name a few.

The National Assembly for Wales has been named the most inclusive employer for LGBT+ people in the UK by Stonewall. The LGBT+ charity also highly commended the Assembly’s work in promoting, recognising and supporting transgender equality, naming it as one of only 11 exemplar organisations in the UK.

It comes after new research from Stonewall found that half of all trans people (51 per cent) hide their identity at work for fear of discrimination or abuse, while one in eight trans employees (12 per cent) have been physically attacked by a colleague or customer in the past year.

Elin Jones AM, Llywydd of the National Assembly for Wales, explained that the organisation’s success had come from making incremental changes throughout the years.“We are proud to support our LGBT+ staff network and continue to work to create an inclusive culture — not only for the people who work here, but for the people we represent across all Wales’ diverse communities,” she said.

Most Advocate readers know that a recent Harris Poll showed a decrease of the acceptance of LGBT people in America over the past year. Many have rightly placed blame for this on a cultural and political climate, fueled by President Trump’s divisiveness, that rejects “political correctness” and societal norms of civility.

I guess that’s just one more of the many ways LGBT people lose in the age of Trump.Of course, Trumpian culture didn’t just happen overnight. This culture of confrontation and fighting has been building for many years, and the Trump presidency is the culmination of a long devolution away from kindness and civility. Now, in all areas of American life, it’s become “us versus them,” a constant fight.

Tahlia René, a Public Health Major at the University of Austin in Texas, discovered two days ago that Tinder had removed her profile from the app.The company stated that Tahlia had been “violating our Terms of Service or Community Guidelines in some way.”

However, according to Tahlia, she had done nothing of the sort.“So @Tinder got back to me and the best they can say is I broke their community guidelines ‘in some way’ but we all know this is because of men mass reporting me for being trans,” Tahlia tweeted.

Instead of “True patriot love in all thy sons command,” the line in O Canada will now read: “True patriot love in all of us command”.Introduced by the late Liberal MP Mauril Bélanger, the bill to reform O Canada passed the final House of Commons vote in June by an overwhelming margin of 225 to 74. Bélanger, who had Amyotrophic Lateral Sclerosis (ALS), was present for the Commons final vote, but has since died.

Conservative politicians initially delayed the bill from becoming law, but could not hold back the tide of progress any longer. At the time of the final vote, Conservatives were not in the chamber, having left to boycott the motion which called for a vote.

Google has bowed to the Indonesian government and removed one of the world’s largest gay dating apps from its Android app store in the country.To crackdown on LGBTQ practices, officials demanded Google remove 73 LGBTQ-related apps from the Play Store, including the gay dating app Blued, and for Indonesian citizens to shun apps that go against societal norms in the largest Muslim-majority nation, the AFP reports.

Communications ministry spokesman Noor Iza confirmed Wednesday that Blued is no longer available on the Play Store in Indonesia. “There was some negative content related to pornography inside the application,” Iza told AFP. “Probably one or some members of the application put the pornographic content inside.”

Google declined to say whether it would remove the other LGBTQ apps that the government had requested. In comparison, Blued is still currently available on Apple’s App Store in the country.

As Toronto police continue to investigate a series of homicides allegedly committed by a man who was active on dating apps, many people are asking how they can protect themselves as they try to meet prospective partners online.

But the case of Bruce McArthur, 66, who faces first-degree murder charges in connection with the disappearances of five men, mostly from the Gay Village, isn’t the only thing making people look over their shoulders.

Police say those who want to protect themselves should:Get to know someone before meeting them in person for the first time. Check to make sure their social media accounts are legitimate. Let a friend know where you’re going or leave a note at your home saying where you’re going and who you’re meeting.