8 Bisexual Stereotypes In The Media

The representation of bisexuality in movies and TV is on the rise now, and it must be a good sign. But the problem is that moviemakers and TV producers present the concept of bisexuality all wrong – there are many bisexual stereotypes that must be debunked.

Today, we will talk about who bisexuals really are and explain how they should be depicted in the media. Let's get started!

Who are Bisexual People?

Before we start talking about stereotypes, let's talk about what it means "to be bisexual". Firstly, let's define the term sexual orientation:

"Sexual orientation involves many aspects of life, such as who we feel attracted to, who we have sex with, and how we self-identify," explains Christine Kaestle, a professor of developmental health at Virginia Tech.

According to this definition, bisexual people are individuals who have a romantic and sexual attraction to both men and women and who identify themselves as bisexual. They may be involved in sexual relationships with male partners, female partners, or both.

Note, if a person is in a heterosexual relationship but also has intercourse with same-sex partners, he may or may not identify himself as bisexual. In other words, if you have a boyfriend and have hooked up with a girl once, it doesn't make you bisexual. Probably you are one of those gay or straight people who keep exploring their sexuality.

In recent years, LGBTQ representation in films has been trending in a positive direction. But unfortunately, there are lots of limitations in acknowledging the depth and breadth of queer people, bi people in particular. Here is a list of stereotypes that are worth discussing.

It's Just a "Phase" or "Stepping Stone"

In most movies, bisexuality is described as a "phase" that is attached to one concrete relationship. Such representation makes us wrongly believe that the characters will change their sexual orientation and become heterosexual or homosexual once the romance ends.

The truth is that it doesn't work this way. Bisexuals are equally attracted to both genders, and one failed relationship will not change their gender preference. They will still be attracted to men and women.

Bisexuality is not a phase; you are allowed to have preferences that can change over time. pic.twitter.com/1b0fBb0o2I

Bisexuality Makes You A Badass

Let's take a look at the list of these bisexual characters:

Fact: In real life, sexuality doesn't define personality. Your attraction to other women, men, and transgender people has nothing to do with your personal traits.

Bisexual people love sex as much as other people who identify themselves as straight or gay (not more, not less). But filmmakers intentionally make viewers believe that bisexuals have a higher libido and can hardly control their desires.

But the fact is that many bisexuals are attracted to the same gender and other genders, emotionally, not physically. They are interested in romance, not regular intercourses.

In other words, if you start dating a bisexual woman, don't think that the only thing she wants is to get you into bed. Probably, she is attracted to you in another way and wants to build a healthy relationship.

Photo by cottonbro from Pexels

Bisexual People Are into Cheating

According to Hollywood movies, bisexual men and women are more likely to cheat. But guess what? It's another lie! Many bisexual people prefer to stay in a committed relationship. And some of them stay faithful to one partner for a lifetime.

Bisexuals, just like gay people and straight ones, base their choices on their moral principles. If your girlfriend has cheated on you, whether she is a lesbian or bi, you can be sure that her choice didn't depend on her sexual identity.

"If bisexuals are seen as avoiding monogamous relationships, they may be viewed as more interested than heterosexuals in dating others outside their current relationship or as more likely to "cheat"on their partner. However, there is no scientific evidence that can prove this," says Leah R. Spalding, a researcher at the University of California. 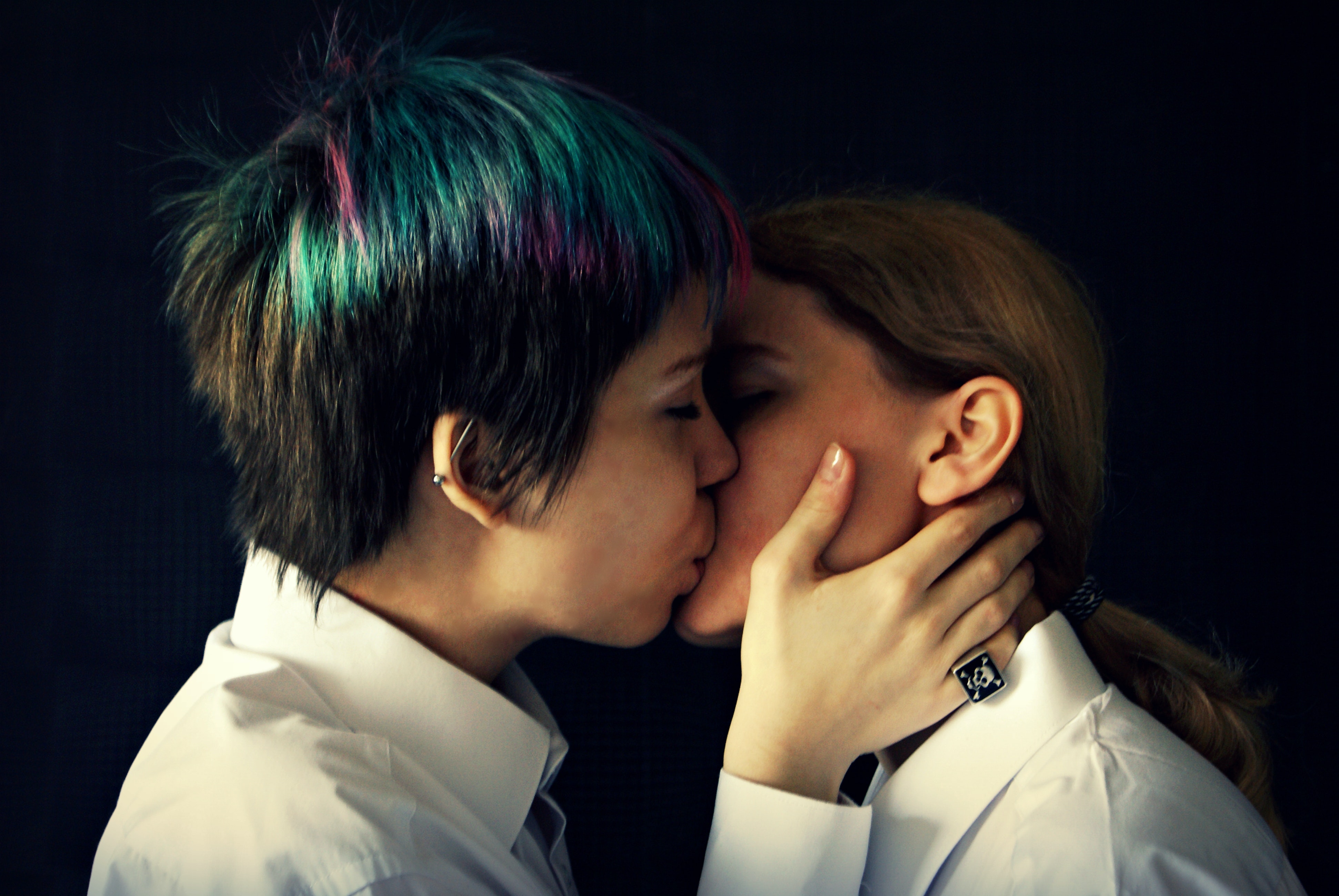 Photo by Victoria Borodinova from Pexels

Heterosexual Relationships Are for Straight Individuals Only

When a bisexual individual dates an opposite gender, everyone assumes that this couple is a straight one. But it's not. Take a look at the following tweet to understand how common this misconception is.

I am bi and I have never been with a straight man, only women & bi men, since I am currently in what appears to be a “heterosexual” relationship everyone assumes we are straight, when in fact both of us are bi & definitely not straight 🤦🏻‍♀️

Modern moviemakers actively support the LGBTQ+ community. Today, almost every TV show has a gay character. Noteworthily, the vast majority of these characters clearly state that they are gay people. We often hear phrases like "Hey, I'm Megan, and I'm a lesbian," and "Hi, I'm Jonathon, and I'm gay".

Now let's talk about people who are attracted to more than one gender. Can you name at least a few characters who openly describe themselves as bisexual people in the movie?

In most films and TV shows, the word "bisexuality" is never used. As a rule, we can guess whether a character is a bisexual person by analyzing his behavior and actions.

New term: "Bi erasure" is an act of ignoring or dismissing bisexuality in culture and media.

But the fact is that there are millions of people who are attracted to more than one gender. The media world can't keep ignoring it. Bisexuality is not a "bad word," and it should be used freely along with such words as gay, lesbian, and queer.

Since bi people are not "gay" enough, they seem to be "not that interesting characters" to make a movie about. That's why we rarely come across bisexual characters when watching Netflix. It's also a kind of media discrimination that should be avoided.

In 2022, it's time to understand that each gender and each sexuality type are equally important. Media corporations should put efforts into showing that it's totally normal to be attracted to one gender and both genders. And it's also totally normal to have an opposite- or same-sex relationship.

The Negative Effect of Stereotypes That Exist in the Media

Stereotypes affect all aspects of our lives. And if we want to live in a better world, we should dispel them all. Here are a few reasons that prove that negative connotations are harmful to our society.

There are many young individuals out there who question their sexuality. Consciously and unconsciously, they compare themselves with bisexual characters they have seen on the screens. If they understand that they have nothing in common with these characters, they doubt whether they are bisexual.

Here is an example. Let's say you are one of those sweet, tender girls who are attracted to people of both genders. You struggle to understand whether you are bisexual. You see that all bisexual females shown in TV shows are hot, bitchy, promiscuous ladies obsessed with sex. On top of that, they are into cheating.

If you don't associate yourself with these characters, you will likely doubt your sexuality. And that's a bad thing. TV shows should reflect real-life stories to eliminate gender inequality in the media. That's the only right way to support members of the queer community and combat discrimination.

Photo by Alex Green from Pexels

They Form Negative Attitudes Toward Bisexuals

Those people who know little or nothing about the queer community and its members base their opinion about bisexuals on what they see on TV. And since almost every bisexual character on TV is presented in a negative light, it makes people believe that all bisexuals are "bad guys".

This is one of the reasons why many bisexual people find it challenging to make new friends and ask people of both genders on a date. Due to the adverse impact of the media, some straight individuals, as well as queers, avoid making connections with bi people.

This problem will exist until media corporations change their strategy. So it's important for LGBTQ+ media advocacy organizations like GLAAD to put pressure on moviemakers and achieve justice.

Do You Want to Get Connected with Bisexual Guys?

Whether you are a straight person or bi, you may be wondering where you can find a bisexual woman/man to start relationships with. Gay guys visit gay bars. Lesbians attend lesbian parties. And where can you meet a person who is attracted to both genders?

The answer is pretty simple. You can find the right person via bisexual chat – yep, online dating is the most popular way modern couples meet. Once you meet someone special, you will feel it on a deep level.

Are you questioning your sexuality and can't decide whether you are attracted to boys, girls, or both? Try out bisexual dating, and you will find out whom you prefer more. Once you feel the real attraction, all your doubts will disappear.

Tip: Be honest with your bisexual dates. Let them know that you previously have had relationships with people of only one gender.

Photo by RODNAE Productions from Pexels

It seems that modern media underestimates the importance of bisexuals and their role in the LGBTQ+ community. But we hope that it will change in the near future.

What can you do to help bisexual individuals who face discrimination? Educate your friends and family about bisexuality and teach them to show respect to all people regardless of their gender. Be an example to follow, and your contribution will be highly appreciated.