Pomosexuality - What is it? What does it mean?

Pomosexuality refers to the sexual orientation whereby a person denies or does not fit any specific label on their kind of attraction. A pomosexual does not feel comfortable with labels such as homosexual, heterosexual, bisexual or even queer. Someone can reject these labels for any reason.

This term is a contraction between "pomo" and sexual. Pomo, here, is short for postmodern or postmodernism and refers to both postmodernism in general and postmodernism in art specifically. The adjective for pomosexuality is either pomosexual or just pomo. Pomo- can also be used as a prefix and can be used in combination with other terms. The use of pomo as a noun to define people who are pomosexual is discouraged. Pomosexuality can be used as a sexuality in and of itself, referring to all who do not feel that a label can properly describe their sexuality. The term can also be used as an umbrella term for individuals who, for whatever reason, cannot or do not want to pin down their sexual preferences with a specific label. Below, we explain some of these categories, community content included.

Cryptosexual is an orientation in which a person is puzzled or confused, or still figuring out their orientation. Because of this, they feel that they cannot describe their sexuality properly using existing terms and, therefore, uses this term. Cryptosexual is the newest of these categories, community content included, to have been added to the umbrella.

Omniacepomo, a contraction between omni - from the Latin omnia, meaning all or everything - ace - asexual - and pomo, from pomosexual. Such a person is on the ace spectrum but doesn't know exactly where and is content not narrowing it down. An omniacepomo does not have a preference as to the gender(s) they are interested in.

Novisexuality is an orientation whereby a person feels complicated about the (lack of) attraction they experience and, as such, cannot put or is content not putting a restricting definition on their activity.

The term pomosexuality was coined by Carol Queen and Lawrence Schimel in their 1997 book "Pomosexuals: Challenging assumptions about Gender and Sexuality." In their work, Queen and Schimel noted that while the sexual orientation labels in the LGBT community (modernism) may fit some, there are many who feel that these labels do not fit their identity (postmodernism). What is more, they argue that, sometimes, labels can, unintentionally, come to define us. Throughout history, especially shortly after the publishing of the book, Carol Queen, Lawrence Schimel, and their book's content have come under fire for allegedly trying to create a replacement for LGBT culture. Nowadays, however, pomosexuality is a broadly accepted part of the LGBT community.

The pomosexual flag was created in July 2016 by Tumblr user pride-color-schemes. There are no broadly used pomosexual symbols.

Since pomosexuality talks about sexual labels and, as such, has no link to gender, there is no particular pronoun to select for pomosexual people. As always, be mindful about someone's preferred use of pronons, and never assume!

Pomosexuality is fairly common as it broadly refers to all post modern means of labeling the link between your identity and your sexual orientation goes. If you believe that existing labels, be they within the LGBT community or outside of it, do not accurately reflect your life philosophy, you may be pomosexual. Maybe you would be interested in paying a visit to a website dedicated to exploring different types of pomosexuality; for instance, you could try browsing other pomosexuals' comments and select a label that fits you.

How to support someone who is pomosexual

Supporting someone who is pomosexual is in many ways similar to supporting someone who is queer: create an atmosphere supportive of their journey and don't make any comments intended to discourage or question their sexual discovery. It should be noted that the best way to support someone whose sexuality is centred around not wanting to attach labels to their orientation would be to respect their use of labels (and not select for them).

An alternative for the pomosexual flag 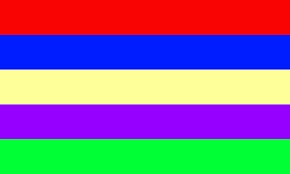 Pomosexual by Pride-Flags on DeviantArt