People dressed in leather and chains, even with masks. It almost seems like something out of a Medieval torture chamber in a movie. Who are these people showing up at Pride, and are they really part of the LGBTQ+ community? 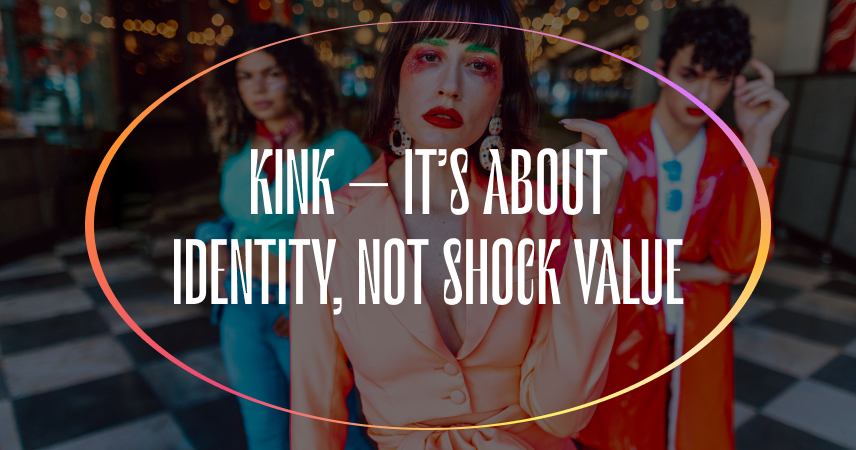 Kink is definitely present at Pride and has been since the very first Pride event following Stonewall. In fact, members of this community were also the first to organize activism against AIDS. And yet every year, as preparations are being made for annual pride events, there is a debate about whether the Kink community should be involved. Those opposed are the older generations of the LGBTQ+ community or those who believe that eliminating kink members from the events and “membership” in the community, in general, will improve society’s tolerance and acceptance. After all, their dress and appearance can be seen as “shocking” and a bit scary to many in the straight world. But here’s the thing: the kink community identifies itself as a valid part of the larger community and does not see itself as “in it” for any kind of shock value. They simply represent a specific gender identity.

How to Define Kink

Do other identities engage in any of the same sexual activities as Kink members? Of course, they do. They simply are not as open and public about them at public Pride events. The Kink community is public and open, especially with their dress and their float/parade activities.

How to Recognize the Kink Community at Pride

It’s impossible not to find them.

Kink is an Identity

Just how do we define any gender/sexual identity? The identity of an LGBTQ+ group relates to its non-binary status and to whom members are attracted, make connections with, and even develop relationships with. Thus, lesbians are females attracted to one another; gays are males attracted to each other, and so on. With kink, this part of sexual identity is not so clear, because all members of other groups on the spectrum can be into kink – a specific kind of sexual activity that is unique.

And this is precisely why many members of the LGBTQ+ community say that Kink is not an identity, but, rather, simply a preference for certain types of sex. They are still part of another more recognized identity (gay, lesbian, bi, etc.). And this is a debate that will probably go on, especially during Pride, as those who identify as Kink gather to celebrate themselves.

The Argument that Kink is a Distinct Sexual Identity

The fact that members of the Kink community see themselves as a unique identity should be enough. After all, don’t pansexuals, even though they move among other identities in a fluid way?

Kink members promote and support a specific sexual preference and act and dress accordingly, just as lesbians, gays, and trans do. The fact that their dress is significantly unique should not be an issue. It is an expression of their identity, and if it shocks some, so be it. That’s not the goal. The goal is to celebrate who they are, the type of sex they want, and the people they love.

Whether others see Kink as a distinct group within the LGBTQ+ community really doesn’t matter. They see themselves as such and therefore should be validated. The debate really doesn’t matter. Perhaps it would be much more important for the LGBTQ+ community to recognize and celebrate the activism of this group since its very beginnings. And the fact that some others may be shocked by their physical appearance and activities during Pride celebrations does not translate to any goal they have for shock value. That’s in the eyes of the beholder.