8 Transgender Quotes to Give Spark to your Everyday Life

As human beings, we're capable of finding inspiration at every corner, and transgender quotes are some of the most beautiful sources of it. Unfortunately, whether we look to social media, print, or TV, the world is still filled with inequality, prejudice, and social stigma. 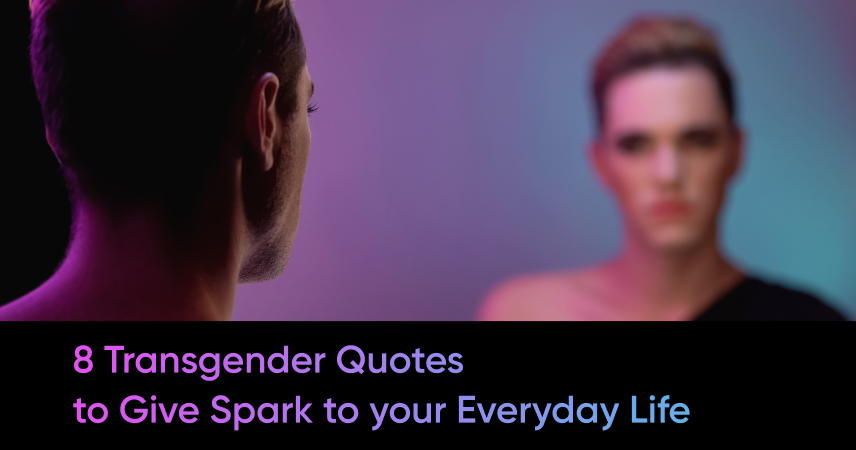 Their words are loud, as is their resolve to stand up and be themselves in this truly diverse world we live in. Why should you care about reading quotes from people belonging to the transgender community?

Here are some of the most inspiring transgender quotes spoken by people who understand that to break free means to spread love and understanding, not hate or intolerance. These words may be just a presence on the web right now, but their lessons will continue to resonate with us for years to come.

“Include everyone, no matter their gender, sexual orientation, race, or religion. We are all human beings and we are part of society.” - Lea T

Lea T is a Brazilian/Italian transgender fashion model is the first transgender person to participate in the Olympic Games opening ceremony in 2016, becoming a vital part of a historic trans moment.

In her opening speech, Lea gave the world some truly powerful transgender quotes and addressed the fact that she was invited to participate in the opening ceremony by referring to the fact that we are all equals and that the world is bigger than any gender identity. Our own personal experiences speak to everything we've been through, and Lea used her power as a transgender woman to turn the world's attention to just that.

“I am transgender and this doesn’t mean that I am unlovable.” - Lana Wachowski

Lana and Lilly Wachowski are an inspiring duo of filmmakers most prominently known for their work on The Matrix and Sense8. The latter is an amazing display of how even our own bodies can't stop us from connecting with the people we care about as more than just fellow human beings but extensions of ourselves.

Fact: Pop culture media continues to present us with amazing, identifiable representations of trans people, such as Tyler from the video game Tell Me Why, or Oshima from Murakami's Kafka on the Shore. These characters are not merely just a presence in their works but instead play vital parts in their central plots, regardless of their gender identity.

Lana's quote refers to her own transitional period as she and her sister became trans women in Hollywood. Despite that fact, or better said "thanks to that fact" Lana and Lilly found new creative voices within themselves, proving that you can break free from the shackles of societal expectations and be reborn as the person you were always meant to be. As Lana puts it, trans people deserve every bit of love and acceptance as anyone else - it's only a natural part of human life.

"Define yourself in your own terms. In terms of gender, race, anything. We are not what other people say we are. We are who we know ourselves to be, and we are what we love. That’s OK. You’re not alone in who you are." - Laverne Cox

Laverne Cox rose to TV fame through her role in Orange Is the New Black on Netflix. What's significant about her career is that she is the first trans woman nominated for an acting Emmy. As part of a major TV series, Laverne reached out to trans youth across the world thanks to the platform's popularity.

Her quote about defining ourselves as human beings only on our own terms is powerful in its sheer simplicity. It speaks to transgender people on a personal, relatable level as it comes from a person very much familiar with the lifestyle and its modern-day struggles.

To my trans siblings you are beautiful, necessary and have every right to be here. You are here for a reason. Let us not be deterred. Let us be determined to survive no matter what.#NotOneMore #TransLiveMatter #TransIsBeautiful

Everyone in this world deserves equal treatment regardless of the color of their skin or their sexuality, just as Laverne said in her interview. Accept who you are and treat others with just as much respect as you do yourself - it's all we can ever do for each other and Laverne Cox is leading the charge in that.

"Don't do things just to impress others or just because you're scared you won't have any friends." - Andreja Pejic

Andreja is a Yugoslav-born model and actress who moved to Australia at a very early age. Her career took a sudden turn toward world-renown when she came out as a trans woman, becoming the face of the transgender people in the modeling world. Andreja's quote is a personal one because it truly does come from her heart.

Being born and raised in South-Eastern Europe, Andreja grew up in a family with certain beliefs about tradition, religion, and society. Her inner identity wasn't easy to come out about, and her raw strength emanates from her quote. It is a testament to the fact that your own life is just about one person, first and foremost - you yourself.

Whether a man or a woman, being content with who you are will not only make you happier personally but make transgender dating more comfortable and easier for you. Adopting this perspective will give you the courage to fight for who you are like nothing else before it.

“I dare to dream of a world where people can dress, speak and behave how they want, free from mockery, derision, judgment, harassment, and danger. This is what I want. Who’s with me?” - Juno Dawson

Juno Dawson is a YA fiction writer and the author of This Book is Gay. She is a famous transgender rights activist and she uses her voice as a writer to present her holistic concept of LGBTQ+ lifestyles to her readers.

In her quote, Juno talks about an ideal world she envisions for people of any sexuality, religion, or skin color. Her writing is very approachable and relatable for trans youth who are glad to have such an active transgender writer to represent their voices publicly.

A fight for equal rights as the one led by Juno is very welcome in today's society, and we're happy to count her among trans women inspiring those around her. Some of the works by Juno Dawson you should definitely check out in your spare time include:

Tip: You can use these and other inspiring transgender quotes in your social media posts, or even on pins or stickers. If you feel like you're living in an inhospitable world, these trans people and influencers can help you find the courage you need to be yourself.

"We are all assigned a gender at birth. Sometimes that assignment doesn't match our inner truth, and there needs to be a new place -- a place for self-identification." - Geena Rocero

Geena Rocero is a TED speaker, a model, and an advocate for transgender rights. Geena is the founder of Gender Proud and has had the pleasure of speaking about transgender rights at the UN and the White House among other places. She is a loud voice for trans people around the globe and her stance is that everyone deserves the right to a personal definition of who they are.

Her own trans moment came at the age of 19 when she transitioned and became an advocate. She speaks about our own personal truth and our own reality - the reality of who we really are underneath. Whether you identify as a boy or a girl, male or female, Geena's thoughts are relevant to our society as a whole.

"Everyone is both sexes in varying degrees. I am more of a woman than a man." - Christine Jorgensen

Christine Jorgensen was born in 1926 in New York - she is the publicly-known person to go through sex reassignment. Christine is a powerful symbol for transgender people for doing what she did in a far less tolerant time than the one we live in today.

She is the embodiment of the fact that just about one person is needed to make a fundamental change in the world. His quote rings true with all of us to some degree. Many of her peers undoubtedly told her that she's making a mistake by changing her sex but her self definition wouldn't have it.

She went through with what she believed in her deepest recesses, regardless of what her family supposed was right at the time. Christine died in 1989 but her actions and words speak to us even today, telling us that even our own bodies can and should go through the change we feel from within.

"Transgender people deserve something vital. They deserve your respect. From that respect comes a more compassionate community." - Caitlyn Jenner

Caitlyn Jenner who is now a retired Olympic athlete came out as a trans woman in 2015. Given her media reputation and influence, Caitlyn also starred in her own reality TV show called I am Cait, where she went in-depth on her many varied decisions to transition.

While she garnered some controversy from male and female viewers alike due to some of her views, many of her quotes are filled with powerful meaning. In this quote, Caitlyn calls for respect and compassion from the public toward the trans community.

Making the mistake of assuming "why" someone might have transitioned or changed their lifestyle takes us further from accepting one another. Taking note of Caitlyn's views can help us all lead a more authentic life where everyone can receive equal treatment.

Taking reign of one's life takes self-determination and these quotes can be game-changing for people who are struggling with their inner selves. If you've experienced even a mere reflection of yourself in one of these quotes, take it to heart. Be unabashedly asserting in everything you do and give yourself the respect and love you deserve.  This alone can make all the difference and help define who you are in the deepest recesses of your personal identity.