19 Gay Comics to Add to Your Collection

Some people are more into books, others into shows and some love to read comics. 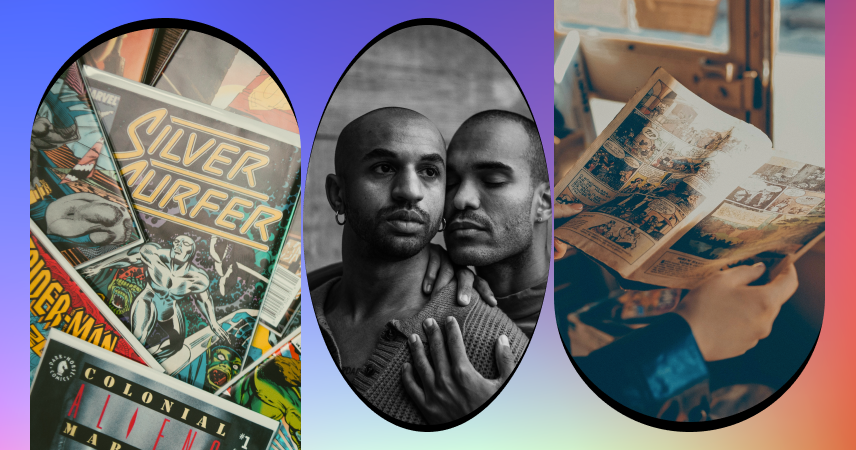 There are so many different categories of comics to choose from, like queer stories and journeys of self-discovery which are all too relatable. On top of that, there are many different queer comics creators who have their own personal styles of telling a story.

No matter what type of comics you like to read, you are bound to find something you will enjoy. Here are some of the best gay comic book stories, manga and graphic novels to add to your collection from this massive queer comics anthology.

A couple consisting of an asexual girl that loves reading boys' love stories and a gay man who is desperately in love with his childhood friend might not seem like the key to a perfect love story. The two might be newlyweds, but Yuriko and Gakurouta will soon realize that a happy relationship is not all about romance, sex, or desire.

Rhea Ewing put together a decade worth of questions into a comic book that revolves around the idea of gender. After asking friends and strangers for their opinion on the matter, Rhea painted a very personal picture of how people from all over the country, queer and not, perceive the concept of personal expression in relation to their lifelong experiences.

The Hero Dial is a rotary phone-like device that gives anyone who dials H-E-R-O superpowers for one hour. Miguel, a daredevil teen finally has the device in his hands and is ready to use it just like the tale insists. Is our main character going to become a praised superhero or will he become overwhelmed with all the responsibilities of a hero in his position?

On the cursed island of Envecor, people live forever wearing their hearts outside their bodies until they find their soulmates so they can become mortal and free. Some of them never want to die, and they hire Heart Hunters to find and kill their soulmates.

After a short talk, Psyche, a Heart Hunter, is hired by the king to find and kill his soulmate. This takes her on a personal journey of self-healing, acceptance, and fixing her broken heart.

After Jake Hyde's father drowned, Jake refused to swim. He lived in the middle of the desert in a small town in New Mexico, but he still yearns to see the ocean and is planning on attending college somewhere near the sea.

After moving, everything he knew about his reality in the small town started to change. He fell in love with swim team captain Kenny Liu and had to leave his best friend Maria behind. This became even weirder after he realized his skin would glow with some weird blue markings every time he came in close contact with the water.

This coming-of-age graphic novel takes place over the course of Juliet Milagros Palante's move from the Bronx to Portland, Oregon. As many artists do, she chooses to share her life with her readers and makes herself a character in her own queer comic book. She has to move as she just came out to her family as queer and her relationship with her mom is rocky.

Her plans now include her working as an intern to Harlowe Brisbane, her favorite feminist author to who she truly looks up. While this might not be the perfect plan, she is trying hard to find the missing pieces that will make her life and world complete. If you feel like you're in a similar situation, it might be a great opportunity for you to make a friend through a gay chat and have someone likeminded to speak to.

The Outfield is a comic made for those members of the queer community who truly love sports. It also includes a lot of queer, lesbian, bisexual, and trans representation through its characters as they participate in basketball, football, hockey, and a plethora of other athletic activities. If you prefer hockey over other sports, for example, each monthly issue features many different sports.

Damian has been bullied his entire life and after arriving at a new school, he wants to do everything in his power to avoid bullying. In order to do that, he decides to start his seventh-grade experience without uttering a single word.

The other kids see him as a different character though, as he lives with his grandparents in a low-income household after losing his mother and his dad leaving him. He always knew he was different from other boys his age, and despite the fact that they are so cruel to him, he ends up having feelings for one.

Aiden Navarro is away at camp during the summer between middle school and high school. This is a time in teens' lives when a lot of things change and our main character also faces this issue. Not only does he have to think about new and old friendships, but he also has to overcome the issue bullies create for him.

Most importantly, the main character has to find a way to search and understand the way he feels for Elias, a boy he cannot stop thinking about. This is where his story leads to self-discovery, a change in his perspective about himself, and acceptance.

Josephine Baker is a character born to dance and despite being born in Mississippi, she finds her way to Paris. The story takes place in 1925 when many important cultural figures of the past are enchanted by her uniqueness and the magic in her dancing style.

Her life was remarkable and is perfectly painted through this biography of her life. Themes of racists, violence and other difficult topics are present in the comic. They all show an important side of the character of the star and how her beliefs through the decades proved that racial harmony was possible.

Tasuku Kaname is the new kid in town at his new high school and is scared of being outed as gay. The stress of this leads him to consider the unthinkable, but he somehow meets a woman who manages to introduce him to a group of peers who deal with issues similar to his own, like how being non-binary can affect one's character.

Our Dreams at Dusk is a coming-of-age manga about LGBTQIA experiences everyone can relate to. Finding their own identity, and questioning their place in the world and sexuality, each character is unique and relatable in the best way possible.

As Jay starts the eighth grade, a few pimples start to pop up and he honestly thinks nothing of it. When it starts getting worse, a doctor prescribes him a powerful medication that brings on some serious side effects. Nothing matters more to him than getting clear skin though.

As the school year progresses, things are not going as planned for the main character. His best friend is pulling away from him, all his friends are in different classes and two classmates of his have feelings for him. The problem is, that he doesn't share the same emotions as them. This is a great queer comic about discovering one's sexual identity as a teen while one's character is still developing.

Sanada is a loner who is isolated from other kids in his school - something he chooses because he wants to keep his gay identity a secret. When Noshiro transfers to his high school, Sanada believes this will scare Noshiro away but this rumor about him being queer rather intrigues him and makes him want to learn more about his character. He decides to win over Sanada; this is how their friendship starts to blossom.

Pug Davis is a fun sci-fi comic about a space hero with the head of a pug. While he is tough and resilient, his partner, Blouse, is the complete opposite as he is shy and sensitive. The two of them though have taken on the difficult task of fighting aliens in space.

Filled with humor and mystery this is one of the queer comics you will not want to put down. It takes place in the town of Southborough, where tourists still visit from all over the country in hopes of seeing the famous Sasquatch.

Louie O'Connor lives in the area too and is convinced that the Sasquatch is real. After their family restaurant starts struggling to stay afloat, Louie and her gay bestie Felix come up with a hilarious and elaborate plan to drive more tourists back into Southborough.

Camden is a gay cat character living in Rust Belt town, where nothing exciting ever happens and every day feels the same. Jeremiah is Camden's best friend who Camden has a huge crush on. Jeremiah is a bad influence and always manages to get the two of them into some new adventures that lead to them getting in trouble. Just how long can this continue happening though?

This is a comic for queer people who enjoy a good horror story. It follows Lucas Wen, a character who takes a lot of pride in being a very realistic and pragmatic person. There is no space for the supernatural in his world and this is why he is shocked to find his cousin Robin is a witch.

His job takes him to one of the most supernaturally saturated neighbourhoods of New York City. There, he meets Roe, a bisexual character who has just started living in Robin's spare bedroom. After her girlfriend, Penelope goes missing, Lucas is forced to open his mind to the possibility of there being more things out there than meets the eye.

Spring Rain is a memoir of creator Andy Warner. Back in 2005, he travelled to Lebanon to study literature in Beirut and there he quickly made friends with a group of LGBTQ+ students. You can easily find your own circle of friends through a gay dating app and live new experiences.

This all took place in the middle of a civil war that created chaos in the area for years, something that affected the life Warner thought he had created as well as his future.

The story of this comic revolves around two men who accidentally swapped their jackets at a party they both attended. After meeting each other in order to get their jackets back, they find something more important that they had been missing.

In each other, they found love, honesty, true companionship, and the ability to let go and be vulnerable. They also found things they always feared like the loss of their own selves and the fear of losing each other.

Picking the Perfect Story for Your Needs

Whether you enjoy romance, history comics or a graphic novel, or manga full of tragedy, this list of comics will help you find the right ones for you. Each of the comics touches on different subjects like one's gender identity issues, making queer best friends, saving the world, and dealing with things most queer people will find relatable.

No matter what comics you search for, there are so many different creators who will make the perfect comic book for you.