Novigender - What is it? What does it mean?

Novigender (novogender) typically refers to a person’s gender identity that is difficult to describe so that it fits a particular gender. It may also define a gender experience or the lack thereof that is too difficult to process or understand.

People who use this term may find their identity is too complicated to pin down to a single term.

Despite some misconceptions expressed online, this is not a new term. It was coined sometime in 2014 on a Tumblr site. The word was created because no relevant one defined a gender experience that was too hard to describe.

Some say novigender may be used interchangeably with novogender as well as questioning.

People who identify with this label may use a variety of different pronouns. They may have partners who use certain pronouns to refer to them. They may prefer to use neutral pronouns like they/them or neopronouns of their choice. That said, novigender people may also use gendered pronouns like she/her or he/him if they choose to. Some individuals may prefer to use their names at all times during the conversation.

It is crucial to share your pronouns in conversation and written communication. If you are unsure of the pronouns a person is using - ask them or their partners. Never assume someone’s pronouns based on their identity or expression.

There are two versions of the novigender flag currently available on the DeviantArt site. The most commonly used one features four stripes. It was posted on the Tumblr site sometime in June 2014. The colors represent the following: 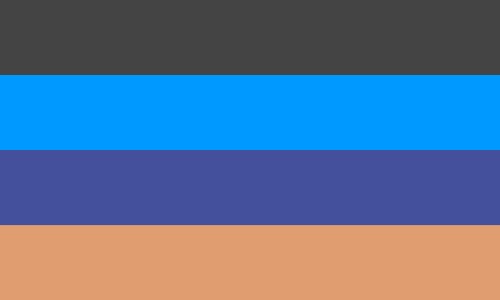 The second version was created and posted on the site by another Tumblr user in August 2016. This one features five stripes. The colors are blue, purple, and grey, with a black swirl in the middle of the center stripe. They have no specific meaning.

How to Know if You are Novigender?

If you are an individual that has a hard time pinpointing your gender identity and the label interests you, then it may be the best-intended term for you. If the identity seems to fit it well and makes you feel happy - then you may be able to identify with the label no matter what your partners say. Remember, labels may shift and change over time, which is okay.

Julia Sotska
Julia Sotska is a former Senior PR Manager at Taimi. She hails from Toronto, Canada where she studied Communications and Journalism Broadcasting. Julia is an experienced journalist, TV producer, editor and communications manager. Her work has been featured in prominent publications in Canada, the United States, Australia, the United Kingdom, and more. Julia is passionate about LGBTQ+ and disability rights, mental health, wellness, and parenthood.
What do you think?
👍 Upvote - 0 😝 Taimi - 0 😍 Love - 5 😯 Surprised - 0 😢 Sad - 0
Get Taimi App for Free