Aegosexual - What is it? What does it mean?

Aegosexual, a term formerly known as autochorissexual, is a sexual orientation that falls under the asexuality umbrella. The reason the term is now known as aegosexual is that the orientation's original perception was associated with paraphilia.

The word aegosexuality can be broken into Latin words a meaning without and ego meaning self. Hence aegosexual word translates to sexuality without self.

The original term autochorissexuality was coined by Dr. Anthony Bogaert, a psychologist who designated it a form of paraphilia. The autochorissexual arousal may involve sexual activities. They may envision people who are sexually attractive yet an autochorissexual person is not going to be interested in a sexual relationship with the sexual target object.

The term was initially perceived to have a negative association with the asexual community. This is why most people who identified as autochorissexual chose to use the term aegosexual instead.

An aegosexual person seldom feels sexual attraction to other people. They are aroused by sexual content but do not want to have sex with another person.

Just like other asexual people, aegosexuals lack the desire to participate in sexual activities. Some aegosexuals tend to have sexual fantasies but do not want to have sex in real life. Others enjoy viewing erotica and pornography but never fantasize about sex in the first person. There are many aegosexual people that experience arousal but do not want to experience relationship dynamics with the target object of arousal.

Dr. Anthony F. Bogaert, a Canadian psychologist who is known for studying multiple aspects of human sexuality, classified autochrorissexuality as a paraphilia in 2012. Bogaert deemed autochorissexuality a psychological disorder. This classification was quite controversial for the asexual community.

Dr. Bogaert’s definition of autochorissexual with the same meaning remained the widely used definition for aegosexual for quite some time. But many people who identified as autochorissexual refused to accept it. Another issue was the fact that Bogaert did not identify as asexual. That is why many ace people found his definition belittling and incorrect. So, new definitions sprouted up on many online forums. An autochorissexual person typically:

The word aegosexual has Latin roots and is much easier to pronounce. It also discards the original perception of aegosexuality as a paraphilia. Aegosexual replaced autochorissexual and was welcomed in the asexual community.

Aegosexuals can be cisgender, transgender, or nonbinary. This means that aegosexual people may use a variety of gendered, gender-neutral as well as pronouns of their own choice.

Examples of gendered pronouns are he/him and she/her. Gender-neutral pronouns may be they/them as well as pronouns like xe/xem, ee/eem, ze/zir. It is important to never assume someone’s gender based on their sexuality or gender expression. Always ask a person about their preferred pronouns and share yours in conversation. 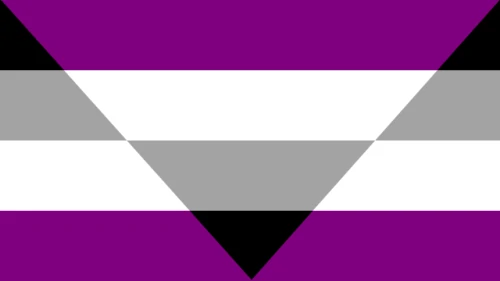 There is also an alternate aegosexual flag designed by a member of the aegosexual community. The meaning of the colors can be interpreted as:

There is also another version which features the inverted triangle but uses the colors of the alternate flag.

A fourth version of the flag was created online in February 2021. The shades of purple represent sexuality whereas the black triangles represent a disconnect between sexuality and oneself. The grey X stands for the grey asexual spectrum. 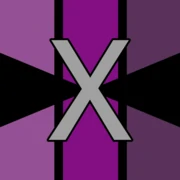 How to Know if You are Aegosexual?

If you feel the term best describes your sexuality then it is valid. Aegosexuals experience arousal from a third person perspective. They enjoy the concept of intercourse but do not have the same enthusiasm when it comes to partaking in sexual activities themselves. Think whether your arousal involves generic notion of sex acts involving you or simply being an observer.

Another version of the aegosexual flag available online

Another alternate version of the aegosexual flag:

Alternate version of the aegosexual flag

Julia Sotska
Julia Sotska is a former Senior PR Manager at Taimi. She hails from Toronto, Canada where she studied Communications and Journalism Broadcasting. Julia is an experienced journalist, TV producer, editor and communications manager. Her work has been featured in prominent publications in Canada, the United States, Australia, the United Kingdom, and more. Julia is passionate about LGBTQ+ and disability rights, mental health, wellness, and parenthood.
What do you think?
👍 Upvote - 166 😝 Taimi - 0 😍 Love - 32 😯 Surprised - 5 😢 Sad - 8
Get Taimi App for Free