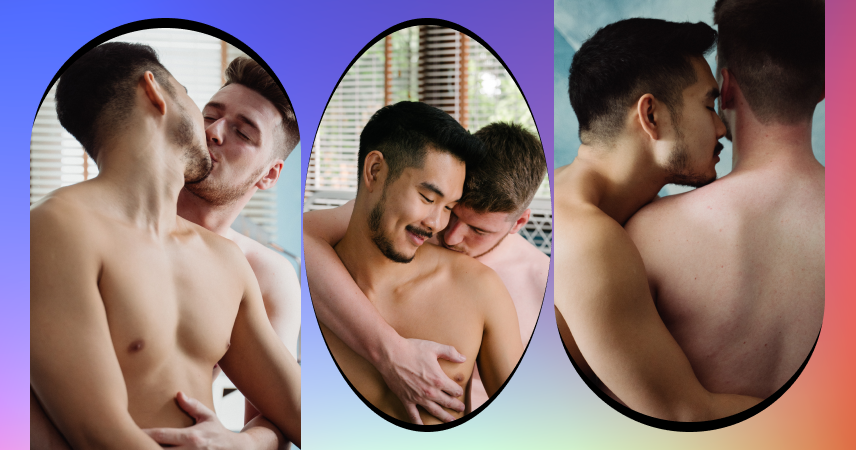 1. A Clarification or Two
2. Once You Decide to Have Your First Gay Experience

TABLE OF CONTENTS
1. A Clarification or Two
2. Once You Decide to Have Your First Gay Experience

Luis J. Gomez on Instagram: “This is what I imagine gay sex for the first time is like. @accomedyclub #luisjgomezpresentsluisjgomez”

You may be a straight guy; you may have only had heterosexual experiences. In fact, you may have always been sort of the typical straight guy - you played football during your teenage years; you dated plenty of girls; and you've had lots of straight sexual experiences, in back seats of cars, in a parking lot, and even out under the stars at night. Your whole life has been as a straight, cis male.

Long story short - you may know a gay guy or two but have never given them much notice or attention. You may have even watched the movie Broke Back Mountain and wondered how that gay sexual experience could have happened when both were straight men their whole life.

Well, wonder no more. A gay sexual experience between straight men happens more often than you might think.

A Clarification or Two

You may have had a few drinks at a bar, and a gay guy has struck up a conversation - you know, small talk. You're enjoying this other guy - you have a lot in common and he's very interesting. Yep, many gay guys actually are. They have far more depth to who they are than just the fact that they are gay. And you are now seeing this and are impressed.

Now, suppose that the conversation has morphed into more and you have even exchanged numbers. And, even after a few days, you find yourself still thinking about him. And you are wondering about the whole gay experience. So, you decide to get on a gay dating app to explore a little more. And what do you find? Some amazing gay men who are well-rounded, who have all sorts of interests, careers, and lifestyles. Here's when you begin to understand the real depth of these guys, not just the one guy you have encountered.

What's more, you are reliving your first encounter from that night at the bar, and you find that you want to spend more time with him. Are you ready for your first gay experience? Maybe, maybe not. But you'll never know if you don't follow up. So, make that phone call and set up another meeting.

Does all of this mean you are now gay? Of course not. But it does mean that, in the sexually fluid society in which we live today, people can start experimenting with their sexuality and explore new experiences, if only because they are curious and have the right to do this.

Once You Decide to Have Your First Gay Experience

So, you have moved beyond the conversation stage with your new gay "best friend" and have a genuine sexual attraction. You're ready to have your first gay experience but are unsure exactly how to go about this.

There is a difference between being comfortable and being nervous. Any first sexual experience is bound to make you nervous, no matter who it may be with. And that nervousness can even translate into being somewhat scared.

Being comfortable, though, is a different ballgame. If you are feeling discomfort, you are questioning if you really want to do this at all. The thought of undressing in front of another male and having intimate touching is not turning you on - it's turning you off and making you a bit nauseous. Clearly, you are not ready for this first encounter and are better with calling the whole thing off. Otherwise, you will embarrass yourself and probably anger that first gay partner. You can count on never seeing him again, no matter how much your comfort level may change. If you have really dug into your feelings and feel comfortable with moving forward, then move onto these next steps.

This may sound silly, but what do you really know about gay sex? If this is to be your first gay experience, chances are, you know very little. So, you'll need to kind of have a look at what happens during gay sex. There are a couple of ways to do this:

Consent and Honesty are Musts

So, it's time to be honest with this first gay guy. You need to explain that you are curious about having a gay experience and want to explore that curiosity with him. What you do not want to do is give the impression that you have decided you are gay and that you want to explore a relationship with him. You are not there, and it's unfair to pretend to be.

If you have been completely honest, it is now time to talk about consent - not just consent to have gay sex but about the details of what will go on. This is a big deal. It's important to explain what you think you will be comfortable doing and what's not okay. This, of course, may change once you actually get into the sex, but for now, set your boundaries. And be certain that this first gay partner agrees to those. Ask him what he would like to do to you and be certain you are in agreement. If it involves penetration, and you are okay with it, be certain to ask that he use a condom.

All of this may sound a bit "clinical" and non-intimate, but better that you have this conversation now rather than wait until you are in the midst of sex and then bring it all up.

Let Your Gay Partner Be The Teacher

You have both decided to move forward. Remember, this is not your partner's first gay rodeo - he has obviously had sex more than a few times with other guys. And his moves will be a lot smoother than yours. In fact, you may experience heart racing, shallow breathing, and such in the beginning. Tell him to take it slow and ask for just some relaxation time before you actually get to it. If he is interested in making this a great experience for you, then he will certainly honor your nervousness and hear what you are saying. You tell him when you are calm enough to go on.

You've most likely had this experience when having sex with a girl. You tell her what feels good and ask her if something you are doing feels good. When she started moaning, you were even more turned on.

First gay experiences are no different. You should talk during the foreplay and tell him what is feeling good (or not). He might ask you to do certain things to him as well. As long as these are within the boundaries you both have agreed upon, of course, honor his requests.

Foreplay may last a long time - no worries. The night is young, and you both have plenty of time to reach orgasm. Enjoy the journey and do what feels right. If you have both agreed, this may even involve the use of some sex toys. If so, and they involve penetration, your partner will most likely have plenty of lube on hand. Remember, he's been here before, you haven't. Eventually, you may be aroused to the point of wanting to reach an orgasm.

There are several ways to reach the pure bliss of climax, and you have talked about these ahead of time. There is, of course, the manual method where you both jack each other off. There is also, of course, oral sex. If your experiences with a girl have involved blow jobs, and you know these feel really great, then this may be the time to experience that with your male partner too.

One quick note here: If you have decided in advance that penetrative sex is on the menu, then you might want to make some preparations in advance, to avoid any embarrassing "accidents." Giving yourself an enema may be a good idea. If that's not possible because of how events unfold, though, don't worry too much about some leakage. If your gay partner is experienced, this has happened before. It just involves a bit more clean up afterward.

You started talking with a gay man. You developed an interest; you pursued that interest because you were curious, and you felt some attraction. Now you have had a gay sexual experience for the first time, and you are sort of debriefing yourself. Here are questions you are probably asking yourself:

You may not have the answers to many of these questions. As Alexander Cheves says in his article for Advocate, "21 Things to Know Before Losing Your Gay Virginity": "If “gay” doesn’t sound right for you, don’t worry — not every man who has sex with men is gay. Some MSM (men who have sex with men) are bisexual. Some are questioning and unsure what to call themselves. Don’t worry about the words and labels — you’ll find a word that fits you in time when you’re ready. Until then, you’re allowed to experiment and experience sex. You always will be."

If you can adopt this attitude, you will see that you don't really have to answer most of these questions at all. You had a single gay episode. It happened. Will there be more? Maybe, maybe not. You will need to feel your way through the journey of your sex life as it unfolds. The important thing is we now live in a society that accepts sexuality as a fluid thing. You can be who and what you want at any time - nothing is wrong as long as it feels right to you. And isn't that such a refreshing thought?