The pandemic hit the stand-up comedy world hard. Comedy clubs and bars were shut down indefinitely across America and around the world due to coronavirus restrictions. People stopped going out. For the vast majority, it boiled down to a special on Netflix or a YouTube video. 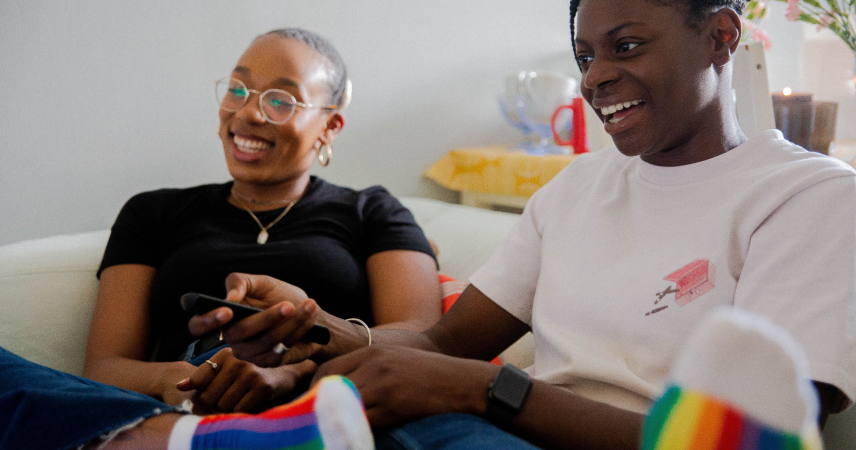 We bet, with everything that's going on in the world, we can all agree on the fact that we all could use a laugh these days. So, who better bring a bit of joy back to our lives than these amazing lesbian comedians?

The stand-up comedy industry has traditionally been largely dominated by straight, white males, but fortunately, it has been changing over the past few years. Queer comedians, including incredibly hilarious lesbian comedians, are now shifting the comedic landscape. These lesbian comedians have unapologetic stand-up sets, which make them some of the funniest people on the comedy scene.

We have to start our lesbian comedian list with Ellen DeGeneres. Taimi has a special relationship with the queen of queer stand-up comedy. Recently our app donated $25,000 to The Trevor Project, which focuses on the mental health of LGBTQ+ youth, live on Ellen's daytime show. In fact, the openly gay comedian is one of the most visible LGBTQ+ people on network television in the United States.

DeGeneres started stand-up career in the early '80s when she was inspired by the likes of  Steve Martin and Woody Allen. In the '90s, Ellen had a successful own TV show which ultimately got cancelled due to the backlash after DeGeneres publicly came out on the Oprah Winfrey Show. This hit Ellen hard, but it did not stop her from pursuing her career further. Contrary to popular belief, DeGeneres did not appear on Saturday Night Live in the 1990s. Her first appearance was in 2000. She hosted Saturday Night Live in 2001.

She is an avid advocate for LGBTQ+ people and gay marriage. Throughout her career, she broke many boundaries for many other lesbian comedians that followed in her footsteps. Ellen's daytime TV show, now in its final 19th season, is one of the longest-running daytime variety comedy shows hosted by an openly gay TV presenter in American history.

If you haven't been living under a rock, you've probably heard the name Hannah Gadsby among the great lesbian comedians. This Australian comedian is truly a powerful and witty queer stand-up comedian that has been working in the comedy circuit for over a decade.

Gadsby is best-known for her incredible hit Netflix comedy stand-up special Nanette. In the raw and extremely funny special, Gadsby explores all the intricacies associated with being a lesbian comedian and whether her self-deprecating humor is harmful to a person in a marginalized community.

This stand-up comic is unafraid to discuss sexuality and gender identity in her comedy openly. Gadsby also serves up a healthy dose of criticism of powerful white males getting away with misogyny during her stand-up. She is also the mastermind behind another Netflix special called Douglas. Her comedy specials not only make people laugh but also think deeper and pay closer attention to the issues LGBTQ+ face. No wonder why this incredible stand-up comedian has so many awards, including an Emmy for Outstanding Writing.

Wanda Sykes is a comedy veteran. Sykes started her career as a writer for The Chris Rock Show. Sykes moved to NYC in the 1990s, where she got the big break opening for Chris Rock.

She is a successful stand-up comedian, actress, and activist. She also regularly performs as a voice actress - think Rio, Over The Hedge, Ice Age - yup Wanda Sykes was in all of them!

Wanda Sykes came out in 2008. She is a proud black woman, an advocate for equality, a mother, a spouse, and a comedy icon. Wanda frequently comments on sexuality, racism, and political issues in the world.

Jane Lynch may be a household name in Hollywood, but not everyone knows that she started her career as a cast member of The Second City in Chicago. Lynch is no stranger to the silver screen, having starred in many comedy films and TV comedy series. She is one of the stars of the big show Glee! where Lynch plays a lesbian coach of the cheerleading squad at William McKinley High School.

Lynch's extensive resume of television and film roles includes shows like Two and a Half Men, Criminal Minds, the L Word, iCarly, and so many more. She is not only a lesbian stand-up comedian but also an actress, singer, and author.

We know, we know, Margaret Cho is openly bisexual but not including this Asian American stand-up comedy superstar would be a crime! Cho is open about sexuality, love, sex, and so much more in her hilarious stand-up specials and skits.

She gained major notoriety with her sitcom All American Girl. Did you know that Margaret started her stand-up career at a comedy club next to her parents' shop? Now you do! Margaret's comedy talks about her experiences as an Asian American bisexual woman. She does not hold back when it comes to political commentary and LGBTQ+ rights.

Esposito is best known for her stand-up as well as being on the writing team of a TV sitcom she created with her now ex-spouse, Rhea Butcher. Esposito also starred in the comedy series called Take My Wife, which explored a relationship of a lesbian comic couple navigating the stand-up world and marriage.

Cameron Esposito is not only a writer and a comedian, she is also a podcast host. Her podcast Queery focuses on interviews with LGBTQ+ personalities. Esposito's humor is dry yet sexy, witty yet hilarious. In her comedy, she frequently raises tough questions and hot topics. In 2018, Cameron Esposito hosted a controversial yet very important stand-up show which focused on sexual assault and raised $100,000 for a charity that works with survivors of sexual violence.

Fortune Feimster is a familiar face on TV shows, including the late-night show called Chelsey Lately with Chelsey Handler, The Mindy Project, Life In Pieces, Kenan, and many more. This stand-up comic has also made a name for herself as an actor and a writer.

Her Sweet and Salty, as well as The Netflix Afterparty, are both a hoot. In fact, Feimster is one of the people to watch out for! Her infectious laugh and personality are guaranteed to make you laugh.

Gina Yashere is a British comedian who definitely knows how to bring comedy to the masses. Yashere just happened to appear on many British and American TV shows. In 2017, she even became the British correspondent for The Daily Show.

Yashere is Netflix, darling. She has three specials, yes, that's right, three specials called Skinny B*tch, Laughing To America, Ticking Boxes, and she also is a part of the Stand-ups season 2.

Yashere's latest television show about an American guy falling in love with a Nigerian nurse is called Bob Hearts Abishola.

Catherine Bohart is an Irish gay comedian. Bohart is also an actor and a writer. Among her works are The Now Show, The News Quiz, and Frankie Boyle's New World Order. She also hosts an online gig called Gigless.

Bohart also appeared on popular British comedy shows like The Mash Report and 8 out of Ten Cats. She is a regular at the Edinburgh Festival.

Bohart has a YouTube channel where she performs since many of the venues are now closed due to the pandemic. Her latest show called Lemon, focuses on breaking the stereotypes associated with sexuality, relationships, and intimacy.

Yes, the one and only. The lesbian comedian powerhouse that has been on the scene since 1979. O'Donnell is an incredible comedian with staying power! Her big break came when she was spotted in a comedy club in Long Island, NY.

Throughout the years, O'Donnell has appeared on countless TV shows. She had her own daytime show, The Rosie O'Donnell Show, hosted The View, and infamously appeared as Betty Rubble in The Flintstones.

O'Donnell is not only a great comedian; she is also an advocate for equality. She constantly fights for LGBTQ+ adoption rights around the world. In 2002 The Advocate named O'Donnell, their person of the year!

Kate McKinnon is a regular on Saturday Night Live. Early in her career, she co-founded a comedy group while studying at Columbia University.

From her beginnings in The Big Gay Sketch Show to SNL, McKinnon is an artist that brings a unique energy to whatever she takes on.

Her iconic impersonations of Hilary Clinton, Ruth Bader Ginsburg, and Justin Bieber have earned her worldwide recognition. McKinnon is not only a comedian; she is also an actor. She starred in films like The Spy Who Dumped Me, Ghostbusters, and Bombshell.

Tig Notaro is a comedy star, comic, actor, and radio contributor. Notaro is best known for her deadpan-style comedy. Since Notaro was diagnosed with breast cancer, her style can also be described as deeply personal. She has two specials, Boyish Girl Interrupted and Happy To Be Here.

Notaro appeared on The Sarah Silverman Show, Community, and The Office. Her Boyish Girl Interrupted special was also nominated for an Emmy.

Lea DeLaria is by far one of the greatest female, queer comedians. Known for her role as Carrie "Big Boo" Black on the hit series Orange Is The New Black. She is also one of the first publicly out gay comedians to appear on network U.S. television on The Arsenio Hall Show in 1993. DeLaria is also credited for one of the most iconic lesbian jokes and stereotypes ever. You know the "what does a lesbian bring on a second date? A U-Haul" joke!

Sam Jay is known for being a writer on SNL as well as a stand-up comedian. She has performed on the Jimmy Kimmel show and also has a Netflix special called 3 In The Morning.

She calls herself a late-bloomer when it comes to comedy. Jay did not start her career until 29, but as she puts it, the late start allowed her to push more boundaries.

Mae Martin is a Canadian comedian, actor, and writer. Martin is famous for starring in the Netflix series  Comedians of the World.

Mae Martin also wrote and starred in the Feel Good series on Netflix, which features none-other than Lisa Kudrow. Martin frequently talks about gender and stereotypes in Martin's routines. Mae Martin's latest book, Can Everyone Please Calm Down, is a hilarious take on gender, sexuality, and identity stereotypes.

Have you seen Sex Education? Of course, you've seen Sex Education! It's a big deal on Netflix! Well, Rosie Jones wrote for Sex Education. This British comedian and actress has appeared in a variety of panel shows. She is truly unapologetically funny. Her routines are not only hilarious but also talk about social issues like accessibility.

Queer women are now much more open about their sexuality, personal lives, queerness, relationships, and themselves, for that matter. Their stand-up routines are unapologetic yet are often relatable to those who are in the LGBTQ+ community as well as straight people who may not be as familiar with queer comedy.