The Kinsey Scale - What’s the Point?

In 1948, being gay was against the law in every U.S. state. And any gay activity was punishable by a prison sentence, for violation of sodomy laws on the books. 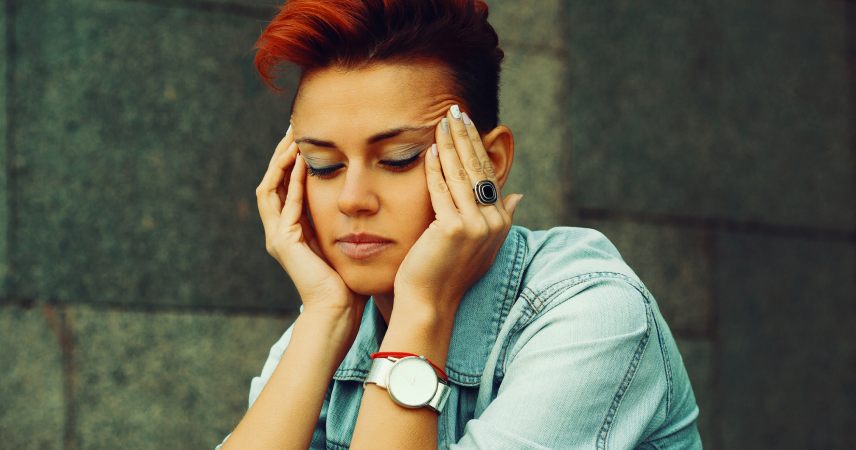 What’s more, the American Psychiatric Association listed the “condition” as a mental health disorder. That same year, an Indiana University researcher, Alfred Kinsey, along with two colleagues presented the Kinsey Scale in a book titled, Sexual Behavior in the Human Male. It was a ground-breaker for two big reasons: One, it took the notion that a person was either straight or gay and threw it out the window. Instead, it used a heterosexual homosexual rating scale to measure sexual orientation. Two, it was a big step toward the truth that being homosexual or bi is not a mental illness but a form of non-traditional sexual activity.

How The Kinsey Scale Came to Be

Kinsey’s premise in conducting his research was this: the human male and  human female, and their sexual orientation, attractions, thoughts, and feelings, were not exclusive to straight or gay preferences. Instead, they fell within a range of combinations.

After conducting thousands of interviews, Kinsey and his colleagues published their research findings, including the following results:

Kinsey realized that he needed to report what his research showed on a continuum and so developed the “Kinsey Scale,” in order to describe sexual orientation in a simple and clear way.

Based upon the interviews, Kinsey and his two colleagues, Wardell Pomeroy and Clyde Martin, concluded that people cannot be categorized with a single sexual orientation such as straight, gay, or bisexual. They can be combinations of these, and these combinations can change over time. So, his team developed a seven-point scale ranging from 0 – 6, along with an “X” for those who had never had socio sexual contacts. This came to be known as the Kinsey Scale. Ultimately, his work resulted in the set up of the Kinsey Institute on the Indiana University campus.

Here is a brief rundown of the seven variables in the Kinsey Scale. Everyone interviewed was placed on this scale, and thus the percentage results in the final Kinsey Reports.

If you want to use this scale yourself to see where your sexual orientation might fall, there is no official Kinsey Scale “test” to take that will give you a score. You just look at the descriptions and place yourself on the scale.

You are probably asking, “so what?” The only answer is that you are contributing to some pretty old and outdated research if you want to share “who” you are with the folks at KinseyInstitute.org. Yes, the Kinsey Institute still exists. They do important further research on sexual behavior and sexual orientation. Fortunately, they have advanced far beyond their start with an outdated heterosexual homosexual rating scale.

Here is a graphic that gives a great visual of the Kinsey Scale: 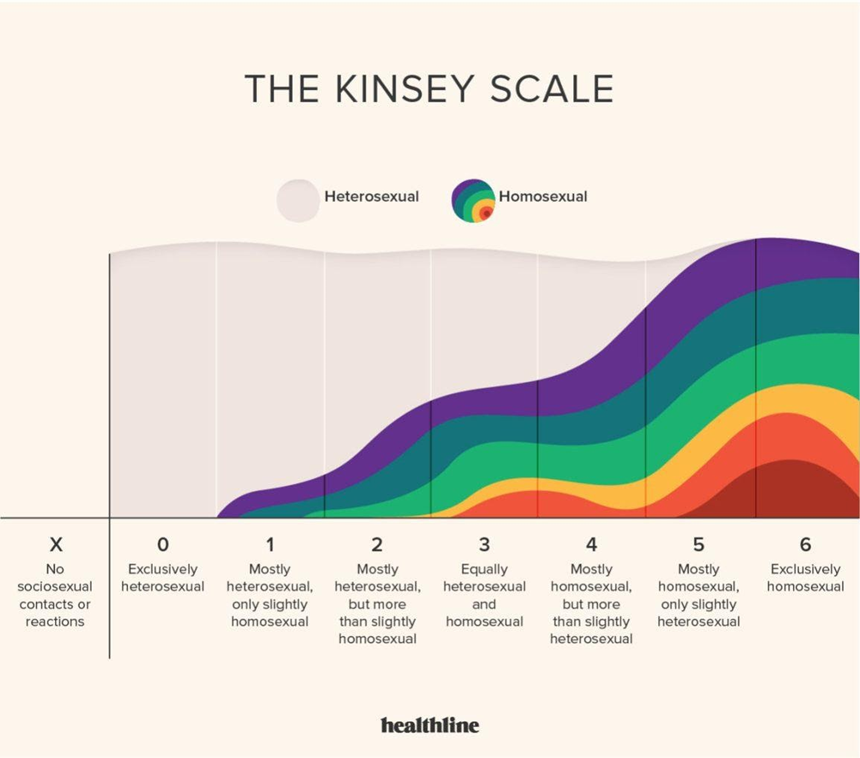 By now, you can see that this research sits in the “Stone Age” of studying human sexuality. In fact, it is almost meaningless today.

Why The Kinsey Scale Has Little Meaning Today

We can thank Kinsey for starting a discussion about non-straight sex and society’s better understanding of it. But given where we are today, this Kinsey Scale test is way too simple and limited.

The Kinsey Scale does not give any real insights into the current LGBTQIA+ community of today, such as homosexual categories or the sociosexual contacts that span such a wide range of sexual behaviors.

There are Some Issues with the Research Itself

In 2013, Dina Spector, contributor to Business Insider, published an article on the research of Kinsey, and issues that surrounded his work. The points she made were probably valid. Most important was this: While the Kinsey team interviewed thousands of men about their sexual histories, past and current sexual attraction, with both the same and/or opposite genders, this initial sex research was conducted on a large number of prisoners - probably not reflective of American society as a whole.  And the original Kinsey reports were not validated by peer reviewed studies.

Other research practices have been questioned. In a PBS article, titled “Kinsey: Teaching and Research,” it was noted that the initial Kinsey Reports included Kinsey himself and some of his research assistants as study subjects. This is not good research practice.

So Why All the Hype?

Remember, homosexuality fell under sodomy laws in 1948 when Kinsey published his first book on human male sexual contacts or reactions and later those of the human female.  The whole subject of sex was taboo - so “taboo,” in fact, that no one spoke of sexuality in public, and televised married couples slept in twin beds. Add to that the political climate. You may not remember this outside of your history books, but it was a time of the “Red Scare.” People were afraid that there were Communists in America who threatened our Christian way of life.

The fear of gays and lesbians “infiltrating” the government was the “Lavender Scare.” In fact, Gil Gabrielson, Chair of the National Republican Party, stated that sexual perverts had infiltrated the U.S. government and were just as dangerous as Communists. In 1952, 162 government employees were fired as "gay suspects." And in 1953, President Eisenhower signed an executive order forbidding federal employment of any homosexuals.

In this environment, the Kinsey Report was not well-received. Mainstream America considered any public discussion of heterosexual or homosexual behavior an attack on its values, perhaps a Communist plot. Sexual minority reflections could not be verbalized. Kinsey was charting new and “dangerous” territory by even studying homosexuality at this time. But he did open the door to more research on human sexuality, more findings, and a greater comfort level about non-traditional sexual behavior. This is the most important legacy he left, even though it didn't fully capture its much of its complexity.

While the Kinsey Scale may be irrelevant today, Kinsey himself was a ground-breaker in the study of human sexuality. Some Hollywood producers decided it would make a great biography, and so the movie,  titled  “Kinsey,” was released in 2004. Here’s a short synopsis of the film:

Kinsey became interested in biology as a child, despite his father’s conservative Christian thinking that such study was “evil.” He went on to become a biology professor at Indiana University, with research on wasps. There, he became intrigued with human male sexual behavior (female too), got permission to teach a course on marriage, and used it to teach about sex. From class discussions, he decided on a research project, originally funded by the Rockefeller Foundation. resulting in the Kinsey Scale.

The Kinsey Scale and report were purely academic. Morals, religion, and romance were not included, something that later researchers did include.

By the time Kinsey published his book on female sex behaviors, the backlash was so severe that he lost his funding, and his health began to fail. He died in 1956.

Kinsey’s legacy lives on through the Kinsey Institute – a research organization that studies human sexuality along with other behavioral and emotional health issues.

The movie was not that popular, but it did receive some Academy Award nominations. In sum, movie critic Sujit Varma, said this about Kinsey: He was “a man driven to uncover the most private secrets of the nation and a journey into the mystery of human behavior.”

Why Should You Care?

So, you may think that Kinsey’s work is not really relevant to you and the current LGBTQIA+ community. In some ways, this is true. But consider what has come since. As a society, we have gone from general mocking, rude and hateful rhetoric as the norm, often depicted in cartoon form, to a far healthier discussion of LGBTQIA+ rights and dignity.

Even Archbishop Desmond Tutu of the Anglican Church, a really conservative organization, stated that he would rather go to Hell than enter the Heaven of a homophobic God. Add to this all of the prominent athletes and celebrities who have “come out” in recent years and have found acceptance. Even movies like “Broke Back Mountain” have become wildly popular.

In many ways, the work of Alfred Kinsey began this revolution in thought. So, yes, his work is relevant to the LGBTQIA+ community today.

So, Are We All on the Right Track Now?

Does this mean that all discrimination and hatred for the LGBTQIA+ community are gone? Of course not. You probably know this all too well. And the current political climate has done little to help:

And, while Twitter may suspend the accounts of such people as Marjorie Taylor Greene for spreading mis-information about COVID, it does not do the same for all hate speech. And so, Twitter also becomes a place where anti-LGBTQIA+ celebs can voice their opinions openly. Here are some recent examples:

What Followed the Work of Kinsey?

Sexual behavior researchers since Kinsey’s time have built upon these two early studies to develop far broader sexuality scales that include many more identities. Probably the three most widely used are:

There are more than 200 sexuality tests/scales, but no one of them takes into account how complex sexual identities really are. One side benefit, though, is that there are lots of online forums related to all of these. And those conversations can really help, if you are struggling or unsure.

From an academic perspective, the goal of any research is to spawn other research. Kinsey certainly inspired other researchers to continue work on this topic as evidenced by the Klein sexual orientation grid and other research mentioned above.

Yes, really. Today, there are as many as 46 terms that relate to varying levels of sexual orientation. These describe both sexual identity/preference and romantic attraction. Examples include such terms as “asexual, bisexual, graysexual, demisexual, and pansexual,” along with related romantic terms, such as aromantic, demiromantic, and polyromantic. Reading descriptions of these terms can bring greater self-awareness.

We are far beyond the heterosexual homosexual bisexual rating scale of Kinsey’s early work. But we are still evolving in our own quest for greater understanding of our own sexuality and that of others, a well as how our own sexual histories have impacted how we see ourselves right now.

So, What Would Kinsey Say Today?

This is a hard one to answer. In his research life, this man took an academic approach to human sexual behavior, even though it was a bit flawed. But opening up the entire subject of sexuality via his Kinsey Scale was certainly his goal, and that he achieved.

In his personal life, Kinsey had homosexual experiences, and his marriage was an “open” one.  It is impossible to know whether Kinsey himself experienced any romantic aspects in his personal sexuality. He never spoke of them.

Considering all of the sexual preferences and behaviors we have today, Kinsey would see his simple Kinsey Scale as totally outdated. But that is not the point. Kinsey’s legacy lies in forcing society to acknowledge non-traditional sexual expression and to enter into a discussion on this reality, ultimately moving toward acceptance and equality.

As the saying goes, “We have come a long way baby.” But as Alecia Beth Moore (aka Pink) says, “I think the best day will be when we no longer talk about being gay or straight…it’s not a gay wedding, it’s just a wedding. It’s not a gay marriage. It’s just a marriage.”