Taimi teams up with Attitude Magazine to get all the dirtiest secrets and hottest gossip right after each elimination. 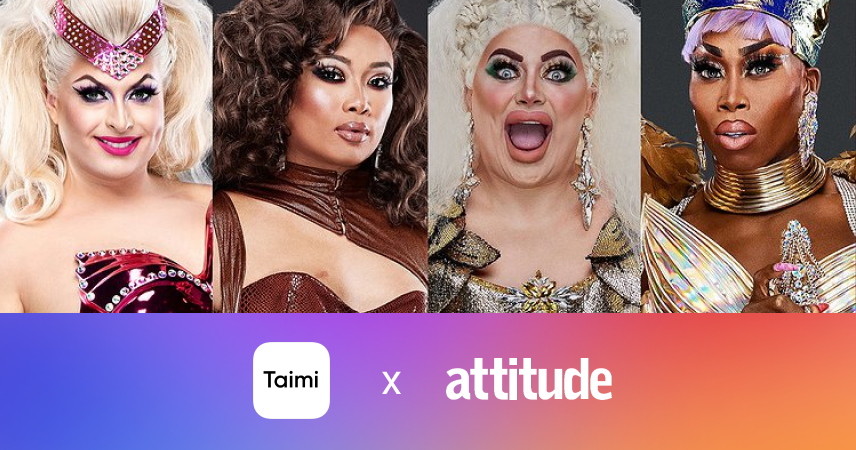 Taimi - LGBTQ+ dating app is once again teaming up with Attitude Magazine for the Attitude For Tea Time online series. This year’s RuPaul’s Drag Race promises to be bigger and better than ever. The UK vs The World is sure to be full of international drag extravaganza! So, who better catch all the behind-the-scenes, never before seen, or heard action?

The first-ever RuPaul’s Drag Race’s international series airs on the newly-revamped BBC Three in the UK and BBC iPlayer with a weekly episode. The Drag Race UK vs The World will see nine world-renowned drag queens from around the globe compete for a brand new title. The queens fighting for the “Queen of the World” crown are Baga Chipz, Cheryl Hole, Blu Hydrangea, Jujubee, Mo Heart, Jimbo, Lemon, Pangina, and Janey Jacké.

As always the show is hosted by RuPaul as well as Michelle Visage, Alan Carr, and Graham Norton. The audience can expect a slew of celebrity judges including Melanie C, Katie Price, Jade Thirlwall, Jonathan Bailey, Clara Amfo, Daisy May Cooper, Johannes Radebe, and Michelle Keegan.

The stars of the show sat down with the one and only Tia Kofi who was a contestant on the RuPaul’s Drag Race UK second series to give a sneak peek into what we can anticipate this season. From what the queens had to say in Attitude For Tea in association with Taimi, there is going to be a lot of drama on the show! So much so the queens wasted no time in naming the shadiest queen of the RuPaul’s Drag Race UK vs The World series.

This year Blu Hydrangea takes the cake, but not all the queens agree. Canada’s Drag Race star Lemon thinks Pangina should be crowned the shadiest queen while Jujubee considers herself to be the rightful owner of the title. If this is just the start of the season, can you imagine what to expect next?

Naturally, Taimi will be there along the way every week after elimination sharing all the hush-hush moments in Attitude for Tea Time with the queen that got booted off the show on Attitude’s YouTube channel.

Make sure to subscribe to get your daily dose of Tea Time in association with Taimi!