Defining Sexual Minority - A Guide for LGBTQ Folx and Allies

You may have heard the term sexual minority from politicians, activists, and journalists and wondered exactly what that means. If so, you are in the right place. Here, we will explore the definition of the umbrella term sexual minorities, who the term applies to, and the sociopolitical impacts of all of this. If you want to really understand the term, the community within that term, and the work that must still be done to protect sexual minorities, then read on. 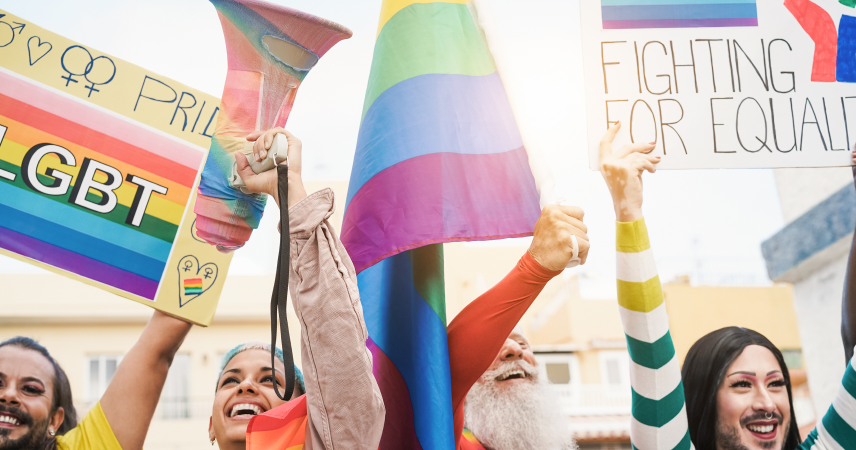 If There are Sexual Minorities, then There Must be a Sexual Majority

Yes, there is. In every society on the planet, heterosexual people are the majority - individuals who are attracted to and who only have sexual contact with their biological gender opposites. Their sexual behaviors remain hetero throughout their lives and are applauded by traditional religions, governments, and society as a whole. After all, this is the acceptable relationship that should result in marriage, children, and a family that is based on traditional values. To them, sexual minorities are grouped into one term - homosexuality - which is far too simplistic. They have not read the research.

Sexual Minority is Everything Else

Now that we've established what the sexual majority is, we have to accept that a sexual minority is any group that does not adhere to the majority identity and characteristics. As a whole, this is a large minority - gay and bisexual men, lesbian gay bisexual women, transgender populations, those who identify as asexual, pansexual, and those who are questioning their sexual identities. Their sexuality is what society considers "different," because of their sexual practices, and can cause increased stress for sexual minorities.

Fact: The sexual and gender minority research office of the National Institutes of Health coordinates important research on SGM communities and publishes an annual summary report. Topics include clarifying and revising the term sexual minority, public health and disease control, psychiatric morbidity, ethnic minorities and their position in surrounding society, and more.

How Does a Member of a Sexual Minority Fare in a Society of Non-Acceptance?

The Need to Stay in the Closet

Sexual minorities may have the need to hide their sexual orientation from a host of other people or groups, including family members, co-workers, fellow students, and some long-time friends.

Staying in the closet means that gay men and women and other members of sexual minorities, even consenting adults, must hide their sexual orientation and all sexual contact. This can result in mental health concerns.

There is a lot of increased stress related to maintaining a sexual or gender identity that is false. And it does take its toll on both physical and psychological health, according to past research and a recent research study conducted by the Louis H. Lafontaine Hospital in Montreal, Canada. Consequences include:

Those who are open about their sexual orientation become victims of bullying, especially if they are teens among a majority of heterosexual adolescents. But open sexual minorities in the workplace also bear the brunt of bullying, although more subtle.

Fact: one UK study reported that over 11 million sexual minorities stated they had been victims of bullying in the workplace, despite laws on the books making such a criminal offense.

On the job, bullying can include verbal slurs and non-verbal behaviors, along with groups who congregate, look at gay or transgenders, and laugh or make "cat-calls." it can destroy the workplace environment and, according to that UK study, results in higher turnover, lower productivity, and higher absenteeism among sexual minorities.

Hate crimes against sexual minorities are also common. In a research report published by the FBI in November 2020, sexual minorities were the victims of a significant increase. And Alphonso David, Human Rights Campaign President, responded:

"Yet another year with alarming levels of bias-motivated crimes underscores just how urgent it is to address this hate crimes epidemic. This year, we saw a tragic new record of fatal violence against gender non-conforming people in this country, particularly against Black and Brown transgender individuals who identify as women. These alarming statistics represent real trauma for individuals and families across this country..."

Fact: The cited FBI report states that hate crimes against sexual minorities are 16.7% of all such crimes, the third-largest category, behind race and religion.

Even though it is against federal law, sexual minorities face subtle forms of discrimination, much of which is tough to prove, especially in the workplace. It is perhaps that job re-assignment, failure to get a promotion or social exclusion on the part of co-workers.

Fortunately, millennials and Gen X'ers are more accepting of any sexual identity and see non-majority sexual practices and gender expression as common. This, over time, will make for far fewer social and workplace concerns. There will probably always be those who will refuse to make a wedding cake for a gay couple, but they will become more and more inconsequential.

We cannot avoid naming names here. The election of Donald Trump ushered in an era of open intolerance and even hostilities to all minorities - religious, ethnic, and, yes, sexual and gender minorities. And the lack of response to this discrimination on the part of the U.S. Congress only encourages such prejudice. This is not the way the majority of the population believes. Gallup polling about the Equality Act of 2021 shows that about 70% of the American public supports the bill that guarantees LGBTQ+ rights and freedom from discrimination.

Fact: The Equality Act passed the House and was sent to the Senate last February. It has stalled because of no Republican support and pressure placed by traditional religious organizations.

This is a special category that deserves some special attention. Transgenders deny their reproductive development because they self-identify as the opposite gender. They dress as they identify, and their sexual preference is clearly on public display. As a result, they are more often harassed and bullied. if money is no object, they can have hormone treatments and even sex-change operations. Otherwise, they will find comfort with other transgenders, a gay male and female, and maybe a bisexual.

The biggest issue for trans is "passing." Most who do not pass fear going out in public and many prefer online relationships which are less than fulfilling. This is an area for more research in the future.

Sexual and gender minority folx, even those kids, teens, and adults with gender dysphoria should be encouraged by several trends:

Hollywood celebrities have long made headlines for coming out, and this is no longer news. But more recently, popular and well-known athletes have come out to identify and announce their homosexuality too. Many were surprised when NFL Raiders player Carl Nassib came out. This has meant a big validation, especially for gay men. And the list of athletes in all sports and all over the world continues to grow, even among Olympics competitors.

The "It Gets Better" Movement

Journalist Dan Savage coined the phrase, "It Gets Better" and publicly encourages LGBTQ youth to stick it out. Since he first started his efforts, he has launched a series of videos to reach both sexual minority and heterosexual youth on this topic. "The goal is to build and maintain these videos to support LGBT kids who are growing up right now...we want to make sure that videos are still being made and that LGBT kids know how to find these videos, how to find us." Savage also wants to focus on education of straight youth.

Soon after assuming the presidency, Joe Biden issued an executive order banning any intolerance based upon the umbrella term sexual identity among all federal departments and agencies and private companies with which these departments or agencies do business. While this doesn't reach the level of Congressional law, it does require that all government departments review their policies for possible inequity.

91% of Fortune 500 companies now have clear policies that ban bias against sexual minorities. Smaller companies are beginning to follow this lead, especially those that are owned and operated by millennials and Gen X'ers who would not hire any individual who is anti-LGBTQ+.

Where are We Now and Where to Go from Here?

There is a clear definition and understanding of the term sexual minority. And we know that society as a whole, at least in the developed Western world, has become far more accepting and inclusive of this population. The same cannot be said of other countries. In many of these countries, non-heterosexual relationships and activities are illegal and mean prison sentences and death. We may not be able to do anything about that, but there is still work to be done at home:

There are still challenges facing the LGBTQ+ community - challenges that simple participation in a Gay Pride event will not meet. Are you ready to be a more active participant? Look at the above six options and choose to become involved.