Sexuality is not a simple concept. First, there are all the physical factors - our bodies and the parts that give us pleasure and orgasms. Then our brains and emotions come along and tell us who and what we are sexually. This is simple for the purely straight hetero - they are born female or male, are comfortable with their genders, and seek out the opposite sex for relationships. 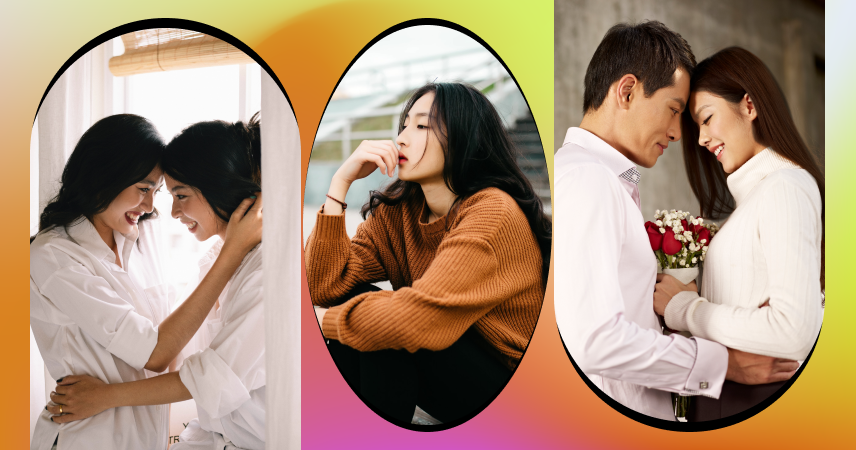 Sexuality is not a simple concept. First, there are all the physical factors - our bodies and the parts that give us pleasure and orgasms. Then our brains and emotions come along and tell us who and what we are sexually. This is simple for the purely straight hetero - they are born female or male, are comfortable with their genders, and seek out the opposite sex for relationships.

It is not so simple for the gay, the bisexual, the trans, or any other person who identifies along the spectrum of being queer. They are not comfortable with the straight roles that the majority of society has pre-determined for them, and they want and seek relationships that they are comfortable with. They may not be comfortable being public about who they are, but, in the words of Bob Dylan, "The times they are a' changin'."

Applying Labels - It's a Human Thing

We have a need to label everything and everyone, even when those labels don't always fit. And here's the thing when we label ourselves and others in terms of sexual preferences: those labels might fit right now, but they can change over time. Straight people, for example, may be straight because they believe they must satisfy that role, only to discover that they really are not.

But labels can give us a start in understanding ourselves because they provide certain characteristics which we can then measure ourselves against.

So now we come to answer the question in the title: "Am I a lesbian?" Or better, you will answer that question for yourself once you have enough information.

In the broadest sense, the label applies to females who have sexual, emotional, and often romantic attractions to other women. But this simple definition does not include others who may identify as lesbians, at least in part, or at certain times. A trans or another nonbinary lesbian, for example, may enjoy straight sexual events as well as same-sex encounters and relationships. And so, being a lesbian can also be a fluid thing. Lesbians are not always cisgender, and they don't seek same-sex encounters and relationships exclusively.

So, Do You Fit This Label?

No one can answer that but you. There is no "test" you can take that will give you a definitive answer. But you can look at the most common characteristics and see where you fall on the spectrum of lesbianism. And don't be surprised if you don't fit the full mold - most do not. Just look at them, decide if they fit you, and, if so, then you can label yourself within that spectrum.

Looking at Causes of Lesbianism

First, let's take a look at what causes lesbianism. The answer? The verdict is still out on this, and the research continues to pour in. Some women and men just know from a very young age that they are not comfortable in a straight, heterosexual world. Thus, young boys may prefer playing with dolls and being in the company of girls. And the same goes for young girls who prefer "boy toys" and masculine dress.

And then there are girls who, as they grow and develop, find themselves gravitating to other girls, during a time when most girls seek out straight relationships with a boyfriend. Many girls may have tendencies toward relationships with other girls but don't have a sexual attraction per se until they reach puberty. Were they lesbians at birth? Again, the verdict is still out.

Fact: Researchers have determined (at least at this time) that lesbianism can be caused by psychological factors, hormones in the girl since birth, or a combination of both.

Check Yourself Against These Common Traits

While this is not any kind of a quiz, you can take a look at these traits and judge for yourself.

You Choose Girlfriends Who are More Affectionate Toward You

They may kiss and hug you more often. They touch you affectionately more often. And you find yourself responding to these physical gestures with pleasure - more so than when the same behaviors come from a guy.

You Become Overly Possessive of a Girlfriend

So, your bestie develops a friendship with another girl or with a guy. You find yourself upset, angry, and even a bit depressed. You want to "deep-six" that friendship so you can have her all to yourself.

You Have Sexual Fantasies About Other Females

You are Not Turned Out by Naked Male Bodies or Parts

Your Feelings are Different From Other Females Your Age

Whether you are in puberty or older, you are not having the same feelings as other gals your age. They talk about straight relationships; they speak about certain guys that are "hot." You just aren't "feeling it." You could be nonbinary, or you could be experiencing your lesbianism. It's time to delve into your feelings some more.

Your Girl "Crushes" Go Beyond the Normal

It's normal to have girl crushes, especially in your teen years. You have a best friend, you do everything together, you spend huge amounts of time with each other, and you can't imagine life without her. These are common things among straight girls. But, if your crushes extend into sexual attraction, then they are beyond the normal straight close relationships that girls often have. And if your girl crushes are not interspersed with guy crushes too, then you should consider that you are a lesbian.

You Have Often Had Sexual Experimentation But Only With Girls

If you have had lots of sexual encounters with both guys and gals, and you find that you reach satisfaction with both, then you may be fully lesbian. But if you have experimented only with girls, find sexual satisfaction, and have no inclination to experiment with guys, then you are definitely a candidate for the label lesbianism. And when that experimentation is no longer that but a habitual thing, then certainly you qualify.

You Don't Hook Up With Guys as Your Girlfriends Do

If you go out clubbing with your straight girlfriends, chances are they flirt and hook up with guys. This may mean things as simple as exchanging phone numbers all the way to going home with them. If you just have no desire to do this, end up going home alone, and don't feel the least bit bad about it, chances are guys are just not your thing.

Others have suggested to you that you might be lesbian

Sometimes, your straight friends may see things you do not. They notice that you seem more into gals than guys. They see your flirty attitude toward girls; they see you gazing longingly at butts and tits; they see those small but telling physical gestures. And they notice that you smooch other girls as they would a guy when in a straight encounter. Listen to what they tell you they are observing and think about it.

So, the Answer to Your Question Is...

Only you know what is in your heart, and only you can do the self-reflection that is needed to decide on your sexual orientation. And, though people have tried to develop a quiz that you might take, they are faulty. You might, for example, be attracted to men on occasion. Is it because you are supposed to be when around your straight girlfriends, or does that attraction feel real? Does the word lesbian make you uncomfortable around your straight friends or co-workers? These are not reasons to deny you sexual preferences if you have gone through the list above and you can relate.

Are you a lesbian? Well, if you are not into the straight relationships that other girls find enjoyable and satisfying, you may well be. Time will tell. Just stay tuned to your inner feelings as you have encounters and experiences. Don't use the "l word" in reference to who or what you are from a sexual standpoint until you are comfortable with whatever term you finally choose.

The key to answering the question, am I a lesbian, is being open to what your heart tells you, and involves not being afraid to find the true answer no matter what it does. If while looking over the list, and almost all the items describe you, it might help answer your question. And remember this: whoever you decide to be, there is support for you within either the straight or LGBTQ+ communities.

A Note About Coming Out and How You Do It

"You come out to yourself first. When and who you come out to is a personal decision." This from Jordan Underwood, content writer, lesbian, and activist. And he's right. Until you have defined yourself as a lesbian, there is no reason to announce what you "think" you may be your sexuality to anyone else.

Once you are sure you identify as lesbian, you have to decide how and to whom you will announce yourself. The important thing is that you do not have to reveal your lesbian sexuality to anyone who may condemn you. Not everyone will be supportive. So, you may want to wait until you have self-confidence. Nothing is wrong with these decisions you make.

Also, be mindful of the risks of not coming out. Your entire life becomes one of living a lie in a straight "world" where human sexuality is based on traditional gender identities. A queer woman can be the subject of scorn, bullying, or worse, not to mention some personal mental health issues.

Figuring out how to tell certain people that you are not straight "...will depend on your relationship to them, as well as your reliance on them," states Katrina Knizek, a lesbian herself and a sex therapist. Certainly, you don't want to be "outed" to straight people you know will not be supportive or accepting. Be a bit discriminating at first. With some, you can be very direct with something like, "I know why I am not interested in dating men. I'm a lesbian." If you don't want to have a conversation and come up with answers to a lot of questions, send a text to that person.

Once you clearly identify as lesbian rather than straight, you have cause to celebrate. You know who you are and find comfort in that. Many who believe they must conform to traditional gender identifications never reach that point. So be the lesbian you know you are, find support from the LGBTQ+ community as well as "gender appropriate" friends who love you, and have the relationships you deserve.