Walk around on any college campus today. You will see how gender-neutral we are becoming. From haircuts to clothing, to jewelry, dorm room decoration, and beyond, we are fast becoming a culture that is gender-fluid. And isn’t that a damn relief? Finally, we can dress for our body types and sizes; finally, we can ditch the feminine and masculine stereotypes in favor of comfort – physical and mental; finally, we can ditch the gender-specific restrooms. And, ultimately, we may even be able to dump the publications and media focus on what is “female” and what is “male.” 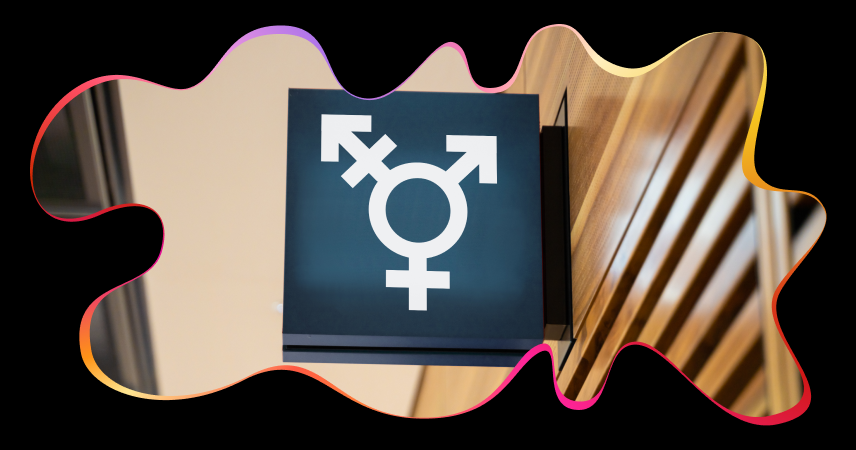 Are we “there” yet? Hell no. We still have a conservative community, among them many politicians, who insist that we deny gender-fluid lifestyles and who are currently passing laws to impose their beliefs on us all. But in the end, we will win out, because progressive millennials and Gen Zer’s will outnumber them.

In the meantime, let’s look at our successes, especially in all things that are or are becoming gender-neutral.

Clothing has always been organized into men’s, women’s, boys’, and girls. And we have traditionally shopped by these departments at retailers – whether brick and mortar or online.

But as the Bob Dylan song from years ago says, “The times they are a-changin’.” Younger shoppers want to move between gender-specific clothing departments and, instead, buy clothing that fits their style and comfort. Thus, a female who would normally wear a size 14-16 can move over to a men’s large and find the perfect shirt style that “fits” who she is. And, in fact, 56% of surveyed Gen Zer’s say they look for gender-fluid clothing.

How are retailers responding? Well, most big retailers have kept their gender-specific departments, but the profit motive is beginning to give them pause. And so many are considering gender-fluid departments as additions to their others – departments where they can feature gender-neutral jeans, leggings, shirts, underwear, shoes - and even career clothing such as blazers, dress slacks, suits, and such. Some big retailers, such as Adidas, are even opening up entire stores that feature unisex clothing and shoes. It’s coming, although a bit slowly.

For now, there are plenty of Indie brands that feature all gender-neutral clothing.

Jewelry is an accessory item that both men and women have worn for centuries. Even the caveman adorned himself with necklaces, anklets, and nose rings made from the bones, skins, and teeth of animals he killed. Ancient Greeks and Romans (both men and women) wore ornamentations all over – belts, amulets, rings, bracelets, and such, and there was not a lot of difference in styles except for jeweled headpieces. Of course, in the case of the Roman Empire, we are talking about the aristocrats. Commoners did not adorn themselves with gold and jewels.

Moving into modern times, it somehow became effeminate for men to wear jewelry, other than pocket and wristwatches, a wedding band, and perhaps another ring (e.g., high school class ring). Accessorized jewelry was for women. But gradually, things evolved. In America, male jewelry was a “thing” for Native American culture, but that was an exception.

Things began to evolve. By the time of the hippie culture in the U.S., jewelry had become very unisex – a lot of leather and beads. For males, this evolved into other accessories, perhaps a gold chain and jeweled rings, but still rather conservative and “masculine-acceptable.” The one exception was in the growing queer community in the Haight-Asbury district of San Francisco and in LGBT clubs, especially among transgenders. And, once the goth and heavy metal communities arose, jewelry became fully gender-fluid.

Today, unisex jewelry of every form is a “compelling movement,” according to fashion expert Adele Dejak, owner of an online retail store of the same name. Her designs take their inspiration from Africa but are popular with all people all over the planet. According to Dejak, jewelry should be a reflection of who each person is rather than bearing specific labels.

Male and female jewelry is no longer separated by gender and type. So, earrings, bracelets, necklaces, anklets, and rings should be worn by anyone who likes them, and they come in all types of metals, corals, woods, leathers, plastics, and more. There is only one rule – find what you like and wear it.

This area of gender fluidity is probably the most visible and yet least seen as androgynous – because current hairstyles are popular with both LGBTQ+ and straight young people. Think for just a minute about all of the types of unisex haircut possibilities there are:

And these are just cuts and styles. Now add the colors – anything from muted highlights and tones to electric greens, pinks, blues, reds, and more. Choose a hairstyle that matches just who you are and have fun with color.

While traditional concepts of makeup use are associated with hetero women, gender fluidity has hit the cosmetics industry, as both industry leaders and new indie companies now realize that makeup is for everyone in the LGBTQ+ community too.

And in current times, members of the LGBTQ+ community have always used makeup as a part of their gender identity. This is perhaps most notable and visible within the trans population, but gay and bisexual men are users as well.

The great thing about makeup is that it can be as flamboyant or as subtle as anyone wants it to be, and it makes a personal statement that cannot be missed.

The cosmetics industry has gotten on board and is marketing its products to members of the LGBTQ+ community in full force, even some of the “big boys' ' like CoverGirl. Ellen DeGeneres is the most visible LGBTQ spokesperson, but the company also recently hired James Charles, a male-identifying model, and huge influencer within the community.

The cosmetics company Fluide is perhaps the most notable, but there are a number of other brands that market uniquely to the LGBTQ+ community. Check them out.

Believe it or not, gender fluidity has “hit” architectural design too. Architects and interior designers have always tried to reflect the culture within which they operate. Frank Lloyd Wright, for example, tried to depict the culture of the industrial age with simple, geometric designs that upended the traditional home styles of the times which, rooted in an agrarian society that was rapidly changing.

And so today, architectural design is becoming more gender-fluid to represent our changing culture of diversity and inclusivity. Think about traditional home designs, for example. A hetero man might have an “office” “study” or “den,” comprised of large pieces of furniture, dark wooden bookshelves, possibly a fireplace. It was a masculine place. On the other hand, a kitchen would sport lighter colors, more “feminine” in design, because that is where a woman would be and work.

As we now move into a more gender-fluid society, architecture and design has moved too. Spaces are now far more open, reflecting the openness of tolerance, acceptance, and diversity of our culture. People just don’t want to be confined to rooms or spaces that are “masculine” or “feminine.”

And here’s a prime example. A national haircut and style chain is “Great Clips.” If you have ever been in one, here is what you see. Simple, utilitarian chairs to wait; colorful triangular flags separating the stations. There are no gender-specific elements – and only one bathroom for patrons, male, female, or whatever. This is a basic gender-fluid design.

For more upscale architectural designs, check out Dezeen, a website that features all innovations in things gender-fluid, including architecture.

One really cool project going on right now is “Gender Bender,” in India of all places. This project features geometric designs and lots of colors, both in building and room designs. Take a look at some of its creations.

We Could Go On…

But you get the idea. As a society, we are finally getting rid of gender-specific everything, and it’s such a liberating relief. There’s resistance, of course. In many states, laws that are meant to marginalize the LGBTQ+ community are being considered and even passed. Be patient. In the long run, they will not win this race. They are part of a culture that has outlived its relevance.