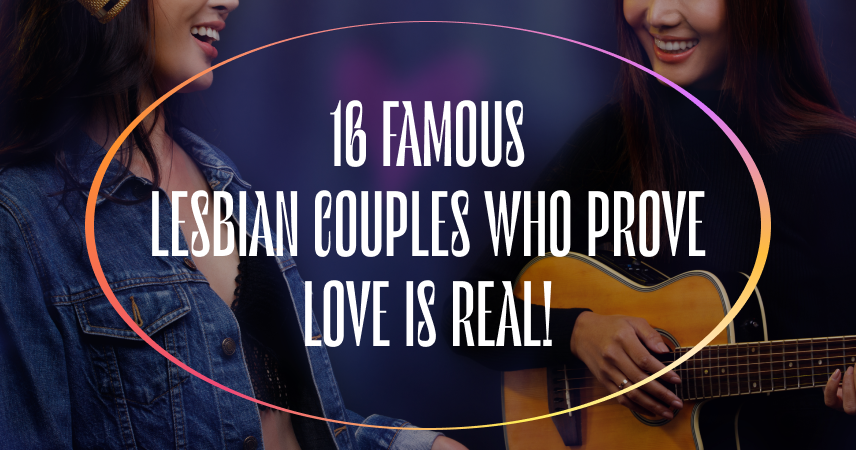 Some of these couples have been together for years and some are even happily married, but all show that love is real. So, here are some of the most famous and loved lesbian couples in our time and why you should follow their love stories too.

Samira Wiley and Lauren Morelli started dating right after Morelli filed for divorce from her ex-husband. Over the years, this friendship led to a loving lesbian relationship, and the couple got engaged in 2016 and then married in Palm Springs in 2017.

In May 2021, Samira Wiley and Lauren Morelli became parents and welcomed their first child into the world, a beautiful baby girl named George.

Despite the 32 years between them, Sarah Paulson and Holland Taylor have been happily together since 2016. While the two actresses met at a party over a decade before that, and Sarah Paulson was dating Cherry Jones at the time.

Following her relationship with Cherry Jones with whom she parted as friends, she began dating actress Holland Taylor. In an unexpected turn of events, Taylor slid into Paulson's Twitter DMs and the rest is history. It appears that starting a lesbian chat with someone is perfect for finding love at any age.

“What I can say absolutely is that I am in love, and that person happens to be Holland Taylor,” said Paulson.

The lesbian couple has received a lot of media attention regarding the fact that the two women are in an age-gap relationship. This is not something that has stopped their love though. In fact, while in the beginning, they kept their love life more private, they now work towards normalizing age-gap relationships.

The pair first started dating each other in the early 2000s but that did not last long. After over a whole decade later, the two found each other again and resumed dating. In the meantime, Lynch went through a divorce from Lara Embry and it seems like the two were just meant to be.

Every interview you will read will show you just how happy the couple is as they only have positive things to say about each other. This comes to show that just because something didn't work out at a certain time, it doesn't always mean that it won't work out in the future.

Actress Kristen Stewart is known for keeping her personal life out of the public eye and this tradition continues with her current relationship. The public doesn't know a lot about her fiancée, Dylan Meyer, the fans that the couple is absolutely in love and has decided to tie the knot only two years after they started dating.

The truth is that the two met years before that on the set of an undisclosed movie. Following that first meeting, the two reconnected at a friend's birthday party and it was love at first sight. From then on the couple has been inseparable.

Brandi Carlile is known for her career as a grammy award-winning country music singer. She and her wife, Catherine Shepherd began dating in 2011 and after a year of dating, they got married in 2012. The couple also has two kids together, and are very much in love.

The couple met at Paul McCartney's charity project and this was a key point for both of them as they are very much involved in activism and philanthropic actions. While they keep their relationship private for the most part, they also like to occasionally share more personal loving posts on their Instagrams.

Portia De Rossi and talk show host Ellen DeGeneres have been one of the most inspiring same-sex couples for many years. The two met in 2000 and the chemistry between them was immediate. From that initial meeting, it would be a few more years until they decided to make their relationship public.

"It's the first time that I've known in every cell of my being that I'm with somebody for the rest of my life," DeGeneres told People Magazine.

This is my life. pic.twitter.com/xPLyP2yYix

Actress Stephanie Allynne and comedian Tig Notaro are a gay couple that many people love and look up to. The "L Word: Generation Q" star and her now-wife got married in 2015 and have nothing but sweet things to say about each other. Life together has been easy and like a dream according to comedian Tig Notaro, and they truly seem to have found a best friend and lover in each other.

Their family grew even more after they had their two sons who are actually twins via surrogate. Their twins are called Finn and Max Notaro. If you want to see more about their life together, you will often find them sharing adorable posts of each other and their marriage and life on their Instagram pages.

If you are a Sex and the City fan, you have probably already known that Cynthia Nixon, who played Miranda Hobbes, has been with her wife Christine Marinoni since 2004. While Cynthia Nixon had previously dated men and has two children with photographer Danny Mozes, her relationship with Marinoni felt like it just fit into place.

Marinoni was worried about the impact their lesbian relationship would have on Nixon's career in the beginning. In 2004, Cynthia Nixon came out as queer and their relationship finally became public. In her own words, the actress has the following to say about her wife:

Actress Jodie Foster and her wife Alexandra Hedison began dating in 2013. Their marriage came very soon after, in 2014, and the couple married in secret. The two prefer to keep their marriage private and out of the public eye.

One of the most fan-favorite moments though was their appearance during the previous year's Golden Globe awards ceremony right from their couch. There, Jodie Foster kissed her wife of seven years with joy after getting her award.

One of the most inspirational couples showing us that same-sex marriage can last through the years, Lily Tomlin and Jane Wagner have been together since the early 70s. Tomlin first saw Wagner winning a Peabody Award for her 1969 CBS television special and decided to reach out to her.

The rest was history and the couple has been together ever since, officially tying the knot in 2013. Not only do they show that true love can last for decades, but they were also a huge inspiration to gay couples at their time who faced great discrimination.

Comedian and "Saturday Night Live" star Kate McKinnon and actress Jackie Abbott first appeared as a couple at the 2017 Emmys, where Abbott won the award for outstanding supporting actress in a comedy series.

Kate McKinnon decided to open up about her sexuality and sexual orientation in 2020 when she presented Ellen DeGeneres with the Carol Bunner Award at the 2020 Golden Globe Awards. The pair chooses to be rather private about their life together and therefore, not much has been made public.

The popular NBC news correspondent and her fiancée, "Today" anchor Jenna Wolfe have been a couple for quite a few years. They first came out as a couple publicly in 2013, where they were able to announce their engagement. At the same time, they were also expecting their first child.

Since then, the two women have become parents to another baby, and most importantly they have become one of the most loved and influential couples in New York. While they have kept most aspects of their personal life private, they continue influencing the LGBTQ and showing that same-sex relationships can have it all.

Robin Roberts and Amber Laign have a gay love story straight out of a storybook. The couple met over 16 years ago through mutual friends and they had actually been set up to go on a blind date with one another. While they started dating very soon after, their relationship was a secret until much later as Robin Roberts had not publicly come out.

In 2013, the "Good Morning America" anchor came out with a public post on Facebook as a gay woman where she shared that she and her long-term partner, massage therapist Amber Laign had been together for 10 whole years. Robin Roberts also thanked her partner for her support and love while she was battling cancer.

“We're so happy. We've been happily in a relationship for 10 years and are looking forward to the next 10 after that." Robin Roberts said.

Comedian Wanda Sykes and her spouse Alex Sykes first met in 2003 and Wands instantly knew she had to get to know Alex better. Just one day later, a close friend told Wanda Sykes not to talk to strangers about stories of remodeling her kitchen and to instead try out some cheesy pick-up lines.

In a funny twist, Alex Sykes was selling granite countertops and she was single at the time. It was truly like a match made in heaven and the two found true love instantly. After that, the two got married in a private ceremony. Previously known as Alex Niedbalski, she then took her wife's last name and became Alex Sykes.

In 2009, Alex gave birth and the couple welcomed their children, a pair of fraternal twins. The twins are a boy and a girl named Olivia Lou and Lucas Claude. It has now been over 13 years and the couple is still very much in love as you can see from all the loving posts comedian Wanda Sykes shares on her Instagram of her woman.

The two met nearly 20 years ago, as Linda Wallem wanted to offer Melissa Etheridge the opportunity to join a future acting gig as an actress. While that didn't work out as planned, the two became best friends, and after Etheridge divorced from her first wife in 2010 she decided to invite Wallem to move in with her and her kids on platonic terms.

This ended up working out for the best and the two became a family, along with Etheridge's children, tying the knot in 2014 in a closed wedding with 100 guests.

Megan Rapinoe and Sue Bird started dating after they first met at the Rio de Janeiro Olympics of 2016. With an impressive 7 Olympic medals between them, the two have found true love and the perfect workout buddy in each other.

The couple got engaged in October 2020 and they announced the happy news through a post on Bird's Instagram. Megan Rapinoe and her now fiancée have had a long history of being very active in publicly supporting and discussing topics such as equal pay for women athletes, racism, police brutality, and of course LGBTQ rights.

The Perfect Representations of Queer Love

These beautiful couples truly show us that love is real. No matter the age difference or the critique of the media, if two people are meant to be together they will stay together. Even if you are spending this Valentine's Day season without a girlfriend, remember that true love is out there and it comes when you least expect it!